City of Secrets: The Truth Behind the Murders at the Vatican 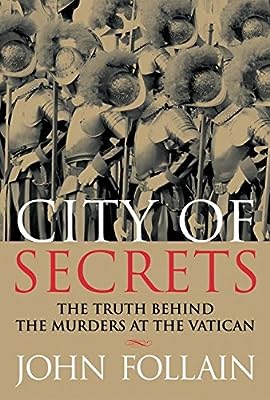 On May 4, 1998, Col. Alois Estermann, commander of the Swiss Guards, the Vatican force that protects the pope, was found shot dead in his apartment inside Vatican City, along with his wife. Also shot dead in the room was a young Swiss guardsman, Cedric Tornay. Three hours after the bodies were discovered, the Vatican released a statement naming Tornay as the killer, his motive a “fit of madness.” Not so fast, thought Follain, author (Jackal, etc.) and Rome-based correspondent for the Sunday Times of London, who also figured that investigating the story would allow him insight into Vatican ways. This book presents his findings, written as a first-person investigation. This technique generates moderate suspense, as Follain follows up leads, interviews tangential figures in the case (the man who succeeded Estermann as head of the Swiss Guards, assorted clerics, the accused killer’s mother et al.), and it allows for vivid firsthand accounts of the Vatican and its officials, as well as of London, Paris and Switzerland, where Follain’s digging also took him. As Follain turns up evidence – mostly circumstantial and anecdotal – that the murders were more complicated than the Vatican opined, including apparent ties between Estermann and the conservative group Opus Dei and a possible homosexual affair between Estermann and Tornay, and as his outrage grows, his writing turns more lurid: his portrait of Monsignor Alois Jehle, chaplain to the Swiss Guards, which closes this account, drips with personal distaste. While by no means an objective account, then, the book does provide unusual access to inner Vatican circles and demonstrates that even those busy in pursuit of the divine can be human, perhaps all too human.