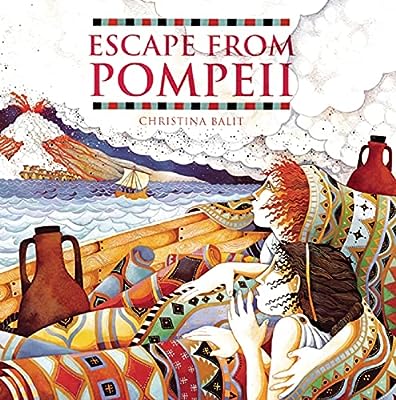 “And then, in one terrible endless moment, they heard mighty Mount Vesuvius roar. Its top exploded in a scream, and flames ripped upward to the sky. A massive cloud of silver ash rose to the heavens, twisting and bubbling in every direction until everything was in total darkness.”

If you plan to take your young children to the ruins of Pompeii, make sure they read this book first. Tranio, like most Roman boys, likes to watch whatever is going on: tradesmen selling their goods, ships unloading their exotic cargoes, politicians making speeches in the forum. But one hot August day a very different scene unfolds. The ground begins to shake, the sky to darken. People run gasping for air. Heading for the harbor, Tranio and his friend Livia hide on a boat and witness one of the most terrifying moments in recorded history-the eruption of Mount Vesuvius and the destruction of their beloved city, Pompeii.

Christina Balit’s fictional tale is based on the latest research. With her dramatic illustrations and a historical note, this story makes an exciting introduction to a fascinating subject.