Fortune Is a River: Leonardo Da Vinci and Niccolo Machiavelli’s Magnificent Dream to Change the Course of Florentine History 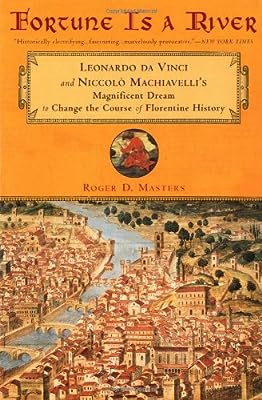 History is sometimes made by seemingly insignificant moments that turn out to have been pivotal in hindsight–and sometimes what didn’t happen proves to be as important as what did. One such moment came in the Florentine court of Cesare Borgia, when a civil servant named Niccolò Machiavelli recruited a local engineer named Leonardo da Vinci to devise a plan to change the course of the Arno River. Diverting that river, Machiavelli reasoned, would deprive Florence’s enemy, the nearby city-state of Pisa, of a dependable water supply. It would also make the Arno River navigable for oceangoing vessels from the inland city of Florence, and as an added incentive, would help limit damage caused by the flood-prone Arno to the surrounding farmlands.

Machiavelli and da Vinci devised a hydrological plan for the river that was extraordinarily promising, at least on paper. The flood-prone Arno, however, made the task an impossible challenge. The pair’s chances of success were further reduced by poor design, bad timing, and undisciplined workers. Their failure brought official disfavor on Machiavelli and da Vinci alike. Leonardo transferred his studio to Milan and then Rome, where he would produce remarkable work, while Machiavelli retreated from public life for a time and used his forced leisure to write The Prince. Roger Masters crafts an epic tale out of a historical footnote. Although some of his conclusions are speculative in regards to Niccolò’s and Leonardo’s relationship, readers will likely find his narrative persuasive and deeply informed.

On the Road with Francis of Assisi – A Timeless Journey Through Umbria and Tuscany, and Beyond The Life of Cesare Borgia: A History and Some Criticisms