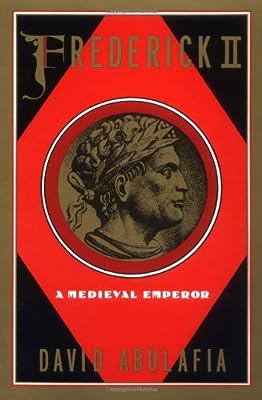 Frederick II of Hohenstaufen, Holy Roman Emperor, King of Sicily, King of Jerusalem, has, since his death in 1250, enjoyed a reputation as one of the most remarkable monarchs in the history of Europe. His wide cultural tastes, his apparent tolerance of Jews and Muslims, his defiance of the papacy, and his supposed aim of creating a new, secular world order make him a figure especially attractive to contemporary historians. But as David Abulafia shows in this powerfully written biography, Frederick was much less tolerant and far-sighted in his cultural, religious, and political ambitions than is generally thought. Here, Frederick is revealed as the thorough traditionalist he really was: a man who espoused the same principles of government as his twelfth-century predecessors, an ardent leader of the Crusades, and a king as willing to make a deal with Rome as any other ruler in medieval Europe.

Frederick’s realm was vast. Besides ruling the region of Europe that encompasses modern Germany, Czechoslovakia, Poland, eastern France, and northern Italy, he also inherited the Kingdom of Sicily and parts of the Mediterranean that include what are now Israel, Lebanon, Malta, and Cyprus. In addition, his Teutonic knights conquered the present-day Baltic States, and he even won influence along the coasts of Tunisia. Abulafia is the first to place Frederick in the wider historical context his enormous empire demands. Frederick’s reign, Abulafia clearly shows, marked the climax of the power struggle between the medieval popes and the Holy Roman Emperors, and the book stresses Frederick’s steadfast dedication to the task of preserving both dynasty and empire. Through the course of this rich, groundbreaking narrative, Frederick emerges as less of the innovator than he is usually portrayed. Rather than instituting a centralized autocracy, he was content to guarantee the continued existence of the customary style of government in each area he ruled: in Sicily he appeared a mighty despot, but in Germany he placed his trust in regional princes, and never dreamed of usurping their power. Abulafia shows that this pragmatism helped bring about the eventual transformation of medieval Europe into modern nation-states.

The book also sheds new light on the aims of Frederick in Italy and the Near East, and concentrates as well on the last fifteen years of the Emperor’s life, a period until now little understood. In addition, Abulfia has mined the papal registers in the Secret Archive of the Vatican to provide a new interpretation of Frederick’s relations with the papacy. And his attention to Frederick’s register of documents from 1239-40–a collection hitherto neglected–has yielded new insights into the cultural life of the German court.

In the end, a fresh and fascinating picture develops of the most enigmatic of German rulers, a man whose accomplishments have been grossly distorted over the centuries.