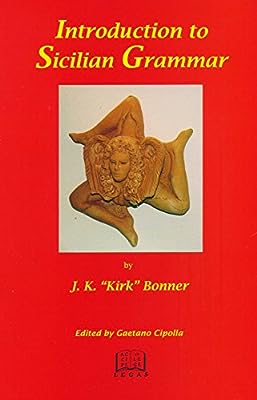 This new book takes a fresh approach to the Sicilian language and the best way to speak it, pronounce it, and spell it. Sicilian is not a slightly different version of Italian as is widely held. It is a language as old as Italian; it has its own unique history, grammar, vocabulary, and structure. Sicilian, as a Language, has a separate history, and it evolved in parallel with Standard Italian. Both experienced different influences. For example, Sicilian has many words drawn from Greek and Arabic, and certain points of its grammar are more similar to Spanish than to Italian. To sum up, Sicilian is a distinct language from Standard Italian.

Between 1880 and about 1930, many people arrived in the United States who came from Italy. Most of these immigrants came from Sicily and Southern Italy. Very few of them spoke Standard Italian, which at that time was spoken by only a small number of Italians. Italians from Sicily and Southern Italy spoke their own languages, and the Sicilians who came to the United States spoke Sicilian. This book concentrates on Sicilian as a living language and is designed to appeal to those whose forebears came from Sicily. It is also designed to appeal to people interested in the Romance languages, and in particular the Romance languages of Italy.

Dr. Kirk Bonner has an avid interest in languages, cultural history, and the customs of various peoples. Ever since he studied Italian, he had a desire to learn the Sicilian language, and he set out to accomplish this goal. His natural interest in the language led him to discover that a really good introduction covering the principles of Sicilian did not exist for English speakers, and he set out to rectify this situation by researching and writing this book. Kirk holds a PH.D. in the History of Science from Johns Hopkins University in Baltimore, Maryland. He conducted original historical research on the crucial work in atomic theory of the Italian scientist, Amedeo Avogadro (1776-1856), and the Sicilian scientist, Stanislao Cannizzaro (1826-1910). Kirk presently lives and works in Southern California.

Speak Italian: The Fine Art of the Gesture

Learning the Language, Literature For Kids

In Italian, Learning the Language, Literature For Kids, Travel For Kids

Ottavia e i Gatti di Roma – Octavia and the Cats of Rome: A bilingual picture book in Italian and English