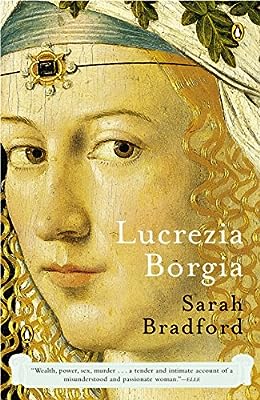 The very name Lucrezia Borgia conjures up everything that was sinister and corrupt about the Renaissance—incest, political assassination, papal sexual abuse, poisonous intrigue, unscrupulous power grabs. Yet as bestselling biographer Sarah Bradford reveals in this breathtaking new portrait, the truth is far more fascinating than the myth. Neither a vicious monster nor a seductive pawn, Lucrezia Borgia was a shrewd, determined woman who used her beauty and intelligence to secure a key role in the political struggles of her day.

Born the illegitimate daughter of Rodrigo Cardinal Borgia and his scheming mistress, Vannozza Cattanei, Lucrezia was twelve when her father became Pope Alexander VI and thirteen when she was forced into her first marriage. She would marry twice more, gaining increasing power with each match, until she came into her own as duchess of the city-state of Ferrara. Bradford argues that in her maturity Lucrezia was an enlightened ruler, kind and decisive in time of war, generous to the poets and artists of her court, passionate in love, and utterly indifferent to sexual morality.

Drawing from a trove of contemporary documents and fascinating firsthand accounts, Bradford brings to life the art, the pageantry, and the dangerous politics of the Renaissance world Lucrezia Borgia helped to create. Bradford is an expert on the Borgia family and in Lucrezia she has found a subject ideally suited to her gift for narrative and psychological insight. Sex, gossip, murder, astonishing beauty, and ambition— this is the Renaissance at its most irresistible.