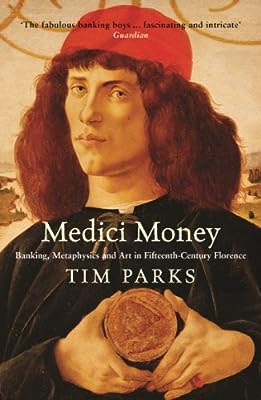 Their name is a byword for immense wealth and power, but before their renown as art patrons and noblemen the Medicis built their fortune on banking—specifically, on lending money at interest. Banking in the 15th century, even at the height of the Renaissance, meant running afoul of the Catholic Church’s prohibition against usury. It required more than merely financial skills to make a profit, and the legendary Medicis—most famously Cosimo and Lorenzo (“the Magnificent”)—were masterly in wielding the political, diplomatic, military, and even metaphysical tools that were needed to maintain their family’s position.

In this brisk and witty narrative, Tim Parks uncovers the intrigues, dodges, and moral qualities that gave the Medicis their edge. Vividly evoking the richness of the Florentine Renaissance and the Medicis’ glittering circle, replete with artists, popes, and kings, Medici Money is a brilliant look into the origins of modern banking and its troubled relationship with art and religion.