Michelangelo and the Pope’s Ceiling 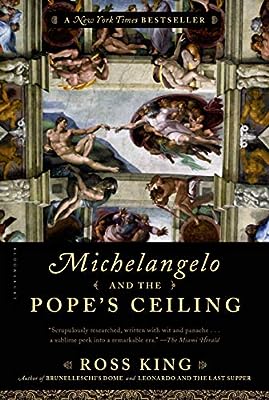 Almost 500 years after Michelangelo Buonarroti frescoed the ceiling of the Sistine Chapel in Rome, the site still attracts throngs of visitors and is considered one of the artistic masterpieces of the world. Michelangelo and the Pope’s Ceiling unveils the story behind the art’s making, a story rife with all the drama of a modern-day soap opera.

The temperament of the day was dictated by the politics of the papal court, a corrupt and powerful office steeped in controversy; Pope Julius II even had a nickname, “Il Papa Terrible,” to prove it. Along with his violent outbursts and warmongering, Pope Julius II took upon himself to restore the Sistine Chapel and pretty much intimidated Michelangelo into painting the ceiling even though the artist considered himself primarily a sculptor and was particularly unfamiliar with the temperamental art of fresco. Along with technical difficulties, personality conflicts, and money troubles, Michelangelo was plagued by health problems and competition in the form of the dashing and talented young painter Raphael.

Author Ross King offers an in-depth analysis of the complex historical background that led to the magnificence that is the Sistine Chapel ceiling along with detailed discussion of some of the ceiling’s panels. King provides fabulous tidbits of information and weaves together a fascinating historical tale.