Passage to Liberty: The Story of Italian Immigration and the Rebirth of America

by A. Kenneth Ciongoli, Jay Parini 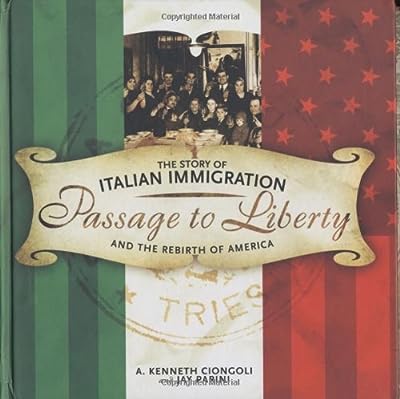 In this slim though surprisingly informative illustrated homage to the Italian-American experience, Ciongoli and Parini (coeditors of Beyond the Godfather) begin their history with the history of America. While the authors mention the great Italian explorers Amerigo Vespucci, Cristoforo Colombo, Giovanni Caboto (John Cabot) and Giovanni da Verrazano they focus on the Italians who, alongside George Washington and Thomas Jefferson, inspired the shaping of America: Cesar Rodney and William Paca were two Italians who signed the Declaration of Independence; Jefferson borrowed a phrase from his friend Filipo Mazzei, an Italian wine merchant and surgeon (“All men are by nature equally free and independent”). Ciongoli and Parini delve into the great wave of Italian immigration that began in the late 19th century, exploring everything from conditions in Italy to the Italian assimilation in the U.S. under such chapters as “Saints of the Immigrants” and “Little Italies.” One chapter, “Hostility and Hangings,” describes anti-Italian crime in the U.S., while a chapter on the Mafia explains that while “70% of [Americans in 1977] polled associated the word ‘Italian’ with the word ‘crime,’ ” only .ooo2% of Italian-Americans have ever been members of organized crime. This handsomely composed book with color illustrations and black-and-white photos also contains pullouts of authentically replicated documents, such as an Italian prayer card, a letter from Jefferson to Mazzei and a letter from Nicola Sacco written to his family nine days before he and Bartolomeo Vanzetti were executed.