Pompeii: The History, Life and Art of the Buried City 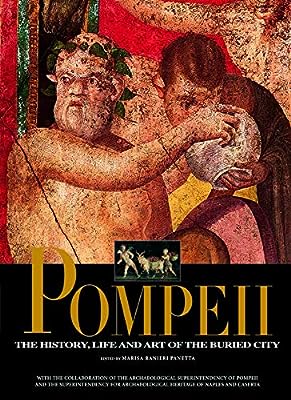 Pompeii for those who want to know the facts:

The rediscovery of Pompeii in 1748 represented a decisive moment for our understanding of the Roman world. To visit the site on these pages is to travel through time: here is the excitement and drama Pompeii represents for archaeology and Classical studies, a complete tour of the complex and fascinating first-century Roman city. White Star’s partners for Pompeii: Art and Treasures of the Buried City are the official institutions charged with preservation and the continuing exploration of the site: the Archaeological Superintendencies of Pompeii and Naples, and the Università Federico II of Naples. This book is the first collaboration of these two expert staffs and each offers a special authority on the excavations and the art of the ancient city. The text documents the most recent investigations and discoveries from the field – some previously unpublished – and represents the most current available view of one of the world’s most famous archaeological sites. Marisa Ranieri Panetta writes for specialized publications, such as Archeo. In 1997 she won the UNESCO “Media Saves Art” prize for reporting on Pompeii. In 2002 she was awarded the International Theodor Mommsen Prize for her reports on Campi Flegrei.

Pompeii: A Novel In The Shadow of Vesuvius: A Cultural History of Naples