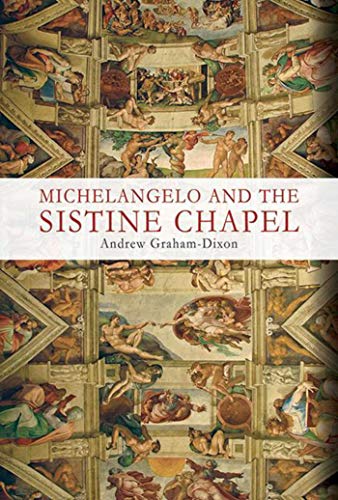 You cannot stand underneath the masterwork that is the Sistine Chapel without considering the genius and painstaking work that went into its creation. But Michelangelo Buonarroti never wanted to paint the Sistine Chapel. Appointed by the temperamental Julius II, Michelangelo believed the suspiciously large-scale project to be a plot for failure conspired by his rivals and the “Warrior Pope.” After all, Michelangelo was not a painter—he was a sculptor. The noble artist reluctantly took on the daunting task that would damage his neck, back, and eyes (if you have ever strained to admire the real thing, you know). Andrew Graham-Dixon tells the story behind the famous painted ceiling over which the great artist painfully toiled for four long years.

Linking Michelangelo’s personal life to his work on the Sistine Chapel, Graham-Dixon describes Michelangelo’s unique depiction of the Book of Genesis, tackles ambiguities in the work, and details the painstaking work that went into Michelangelo’s magnificent creation. Complete with rich, full-color illustrations and Graham-Dixon’s articulate narrative, Michelangelo and the Sistine Chapel is an indispensable and significant piece of art criticism. It humanizes this heavenly masterpiece in a way that every art enthusiast, student, and professional can understand and appreciate.

After an explosion in Rome destroys the Israeli embassy, Gabriel Allon makes a disturbing discovery: the existence of a dossier in terrorist hands that strips away his secrets, and lays bare his history. Drawn into the heart of a service he’d once forsaken, Allon finds himself stalking a master terrorist across a bloody landscape generations in the making. But soon, Allon will wonder who is stalking whom. When the final showdown comes, it won’t be Allon alone who is threatened with destruction. For it is not his history alone that has been exposed.

The Vatican Princess: A Novel of Lucrezia Borgia 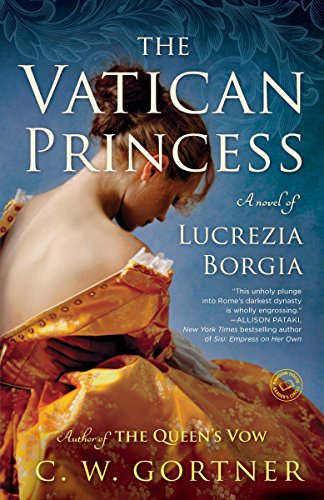 For fans of Philippa Gregory and Alison Weir, bestselling author C. W. Gortner effortlessly weaves history and drama in this captivating novel about one of the world’s most notorious families. Glamorous and predatory, the Borgias fascinated and terrorized 15th-century Renaissance Italy, and Lucrezia Borgia, beloved daughter of the pope, was at the center of the dynasty’s ambitions. Slandered as a heartless seductress who lured men to their doom, was she in fact the villainess of legend, or was she trapped in a familial web, forced to choose between loyalty and survival?

With the ascension of the Spaniard Rodrigo Borgia as Pope Alexander VI, a new era has dawned in Rome. Benefitting from their father’s elevation are the new pope’s illegitimate children—his rival sons, Cesare and Juan, and beautiful young daughter Lucrezia—each of whom assumes an exalted position in the papal court. Privileged and adored, Lucrezia yearns to escape her childhood and play a part in her family’s fortunes. But Rome is seductive and dangerous: alliances shift at a moment’s notice as Italy’s ruling dynasties strive to keep rivals at bay. As Lucrezia’s father faces challenges from all sides, the threat of a French invasion forces him to marry her off to a powerful adversary. But when she discovers the brutal truth behind her alliance, Lucrezia is plunged into a perilous gambit that will require all her wits, cunning, and guile. Escaping her marriage offers the chance of happiness with a passionate prince of Naples, yet as scandalous accusations of murder and incest build against her, menacing those she loves, Lucrezia must risk everything to overcome the lethal fate imposed upon her by her Borgia blood.

Call Me By Your Name: A Novel 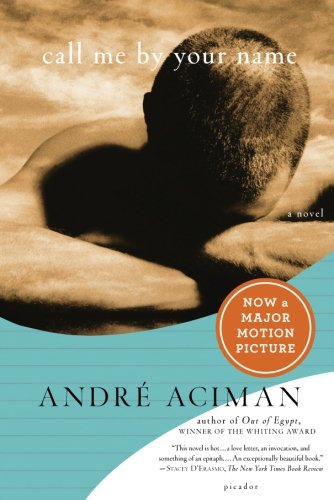 Call Me by Your Name is the story of a sudden and powerful romance that blossoms between an adolescent boy and a summer guest at his parents’ cliff-side mansion on the Italian Riviera. Unprepared for the consequences of their attraction, at first each feigns indifference. But during the restless summer weeks that follow, unrelenting buried currents of obsession and fear, fascination and desire, intensify their passion as they test the charged ground between them. What grows from the depths of their spirits is a romance of scarcely six weeks’ duration and an experience that marks them for a lifetime. For what the two discover on the Riviera and during a sultry evening in Rome is the one thing both already fear they may never truly find again: total intimacy. The psychological maneuvers that accompany attraction have seldom been more shrewdly captured than in André Aciman’s frank, unsentimental, heartrending elegy to human passion. Call Me by Your Name is clear-eyed, bare-knuckled, and ultimately unforgettable.

One Summer Day in Rome: A Novel

This enchanting novel about three couples drawn irresistibly to Rome is narrated by the city itself. Alice, an art student in New York City, has come to Rome in search of adventure and inspiration before settling down with her steady, safe fiancé. Meg and Alec, busy parents and successful business people from LA, are on a mission to find the holy grail, a certain blue tile that will make their home renovation complete—but soon it becomes clear that their marriage needs a makeover as well. Connie and Lizzie are women of a certain age—“Sometimes I look at my laughter lines and wonder what on earth could have been that funny”—who come from London to scatter the ashes of their beloved husband and brother. Both women are seemingly done with romance, but Rome has other ideas. Brimming with wit and charm (and gelato), One Summer Day in Rome is the most delicious novel you will read this summer. 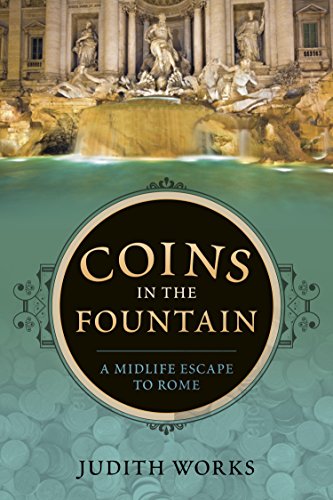 With middle age looming, Judith Works decided it was time for a change. But after graduating from law school at the age of 47, she still faced the question “What now?” Casual conversations about far-off travels with husband Glenn became a reality with the offer of a dream job at the United Nations in Rome, Italy. Coins in the Fountain brings to life the challenges of acclimating to the beautiful and chaotic ancient city of Rome. Works shares her struggles of learning the arcane rules and folkways of the UN while Glenn begins his valiant effort to cook Italian-style, as they both endeavor to embrace la dolce vita. With an extraordinary count and countess for friends, dogs in the doctor’s office, snakes and unexploded bombs on the golf course, along with a sinking sailboat, the unexpected was always just around the corner. Through wit, wry humor, and enticing descriptions of food and travel adventures, Works takes you on a journey into the heart of what it is truly like to live in the Eternal City. According to Roman lore, if you toss a coin over your shoulder into the famous Trevi Fountain, the gods will grant you a return trip. When it was time for them to leave, Works made that hopeful toss of a coin and her wish was granted. 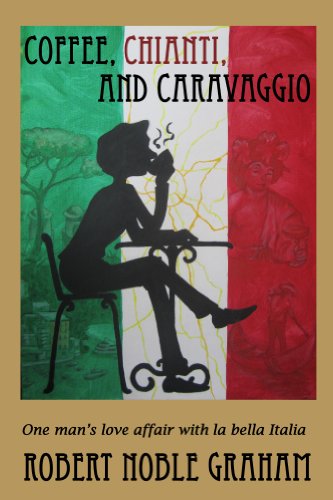 A masterwork of Italian rambling. Those who have rambled with Robert through Cuba and Spain already know what to expect, but Italy is more so. Robert rambles through great sites of Rome and Venice of course, but finding a special meal on the exclusive beach of Portofino or listening to woodworm digest a bed in the Chianti hills take a special mastery. Whether getting lost on the tourist road from Bologna or crossing to Capri with a Mafia don, Robert rambles through history, language and gastronomy as readily as the back streets of Naples for delight, color and discovery. Who did Caravaggio kill and who killed him? What did Tiberius get up to in Villa Jovis? Why are car crashes in Naples more democratic than anywhere else? How can one man who so easily loses himself when travelling be so good at finding unique, memorable companions? Sometimes alone, sometimes in company, Robert’s tales give you more color, romance and knowledge of Italy than many an expensive visit will provide. Whether you wish to laugh, marvel or learn, this book will meet the need.

The Vatican Pimpernel: The World War II Exploits of the Monsignor Who Saved Over 6,500 Lives 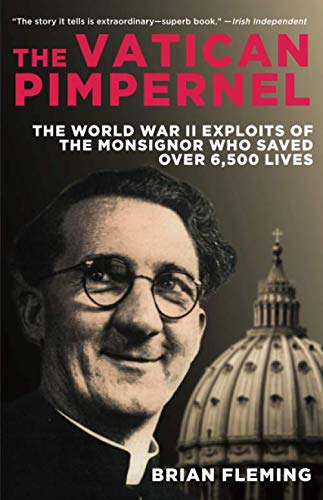 During the German occupation of Rome from 1942 to 1944, Irishman Monsignor Hugh O’Flaherty ran an escape organization for Allied POWs and civilians, including Jews. Safe within the Vatican state, he regularly ventured out in disguise to continue his mission, which earned him the nickname “the Pimpernel of the Vatican.” When the Allies entered Rome, he and his collaborators – priests, nuns, and laypeople of numerous nationalities and religious beliefs – had saved the lives of over 6,500 people. The first new telling of this extraordinary story in decades, this book also addresses the fascinating dichotomy between O’Flaherty and Herbert Kappler, the Gestapo chief in Rome who ordered him killed, and who, after the war, reconciled with the monsignor, and even asked him to perform his baptism. For his heroic efforts, O’Flaherty was awarded the highest honors, including a Congressional Medal, and was the first Irishman named the Notary of the Holy Office. His story was immortalized in the 1983 film The Scarlet and the Black, which starred Gregory Peck as O’Flaherty.

Mistress of the Vatican: The True Story of Olimpia Maidalchini: The Secret Female Pope

Eleanor Herman, the talented author of the New York Times bestselling Sex with Kings and Sex with the Queen goes behind the sacred doors of the Catholic Church in Mistress of the Vatican, a scintillating biography of a powerful yet little-known woman whose remarkable story is ripe with secrets, sex, passion, and ambition. For almost four centuries this astonishing story of a woman’s absolute power over the Vatican has been successfully buried — until now. 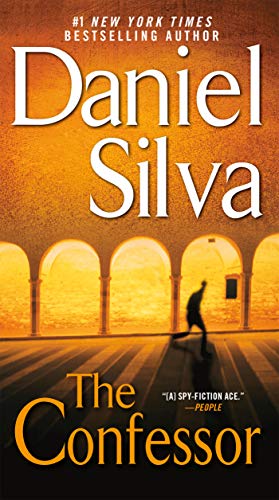 Dark secrets are revealed in Vatican City in this Gabriel Allon thriller from #1 New York Times bestselling author Daniel Silva. In Munich, a Jewish scholar is assassinated. In Venice, Mossad agent and art restorer Gabriel Allon receives the news, puts down his brushes, and leaves immediately. And at the Vatican, the new pope vows to uncover the truth about the church’s response to the Holocaust – while a powerful cardinal plots his next move. Now, as Allon follows a trail of secrets and unthinkable deeds, the lives of millions are changed forever, and the life of one man becomes expendable.