by Calogero Messina, translated by Alexandra and Peter Dawson, In English. 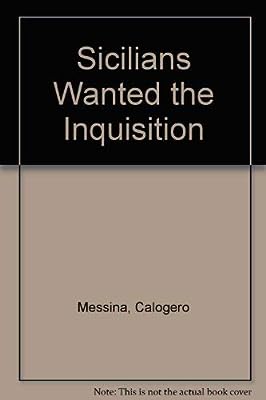 CALOGERO MESSINA teaches at the University of Palermo. He is the author of a number of historical, critical and literary Works. His publications, which include Voltaire e il mondo classico (1976), Il Caso Panepinto (1977), Giordano An-salone in Sicilia (1980), Viaggio in Spagna e Portogallo dalla Sicilia (1981), Immagine della Sicilia (1983) and Sicilia e Spagna nel Settecento (1986), have been well received by Italian and foreign critics such as Virgilio Titone, Luigi Alfonsi, Giovanni Allegra, Raoul Verdi6re, Pierre Grimal and Helmut Koenigsberger. Professor Messina is a frequent contributor to prestigious international journals and is widely known for his radio and television programs.

SICILY 1780. Rumor has it that they want to abolish the Holy Inquisition. Sicilians, of every social condition, are alarmed, they protest. Petitions are sent to the King by the Archbishop of Palermo and all the Bishops of Sicily to save the Tribunal, for the good of the kingdom, the preservation of religion and of discipline and morality; petitions are sent by the Senate of Palermo and the Deputation of the Kingdom: how many people would lose their jobs! In this atmosphere three men from different parts of Sicily voice their opinions. They are living through the passage from one age to another very different one, the eclipse of Spain and the triumph of France. The Inquisition shocks nobody; there are other spectacles no less horrific than the public burnings. The accomplice is society, more inclined to watch a man being burned or a criminal being quartered than a bullfight and the sacrifice of an animal. All Sicily is the Holy Inquisition. Ladies too are proud to wear the cross of the Holy Office and they dine handsomely behind the platforms as the trials are being read. Ragamuffins squabble to enjoy the processions and the burnings and they scrounge around them and if they can, they stuff their stomachs too. These Sicilians have no scruples about being informers of the Inquisition, while they refuse to collaborate with ordinary justice. Amazement, fear, regret, when the Inquisition is indeed abolished. The mentality of the time, the language, certain behaviors, incredibly repeat themselves in our own day, as if nothing had changed in Sicily.