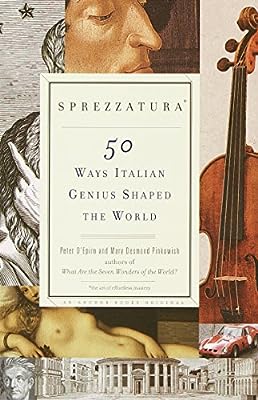 “Everyone knows the difficulty of things that are exquisite and well done,” the Renaissance philosopher Baldassare Castiglione once remarked. “So to have facility in such things gives rise to the greatest wonder.” Italians call that artful facility sprezzatura, a term, Peter d’Epiro and Mary Desmond Pinkowish maintain, that well describes the nation’s genius. They have reason to celebrate: Italy, after all, has exerted an influence in world affairs and culture all out of proportion to its size and population, and has done so for hundreds of years. Among the authors’ subjects are the navigators Christopher Columbus, Amerigo Vespucci, and Giovanni Verrazzano, whose transoceanic voyages changed the course of world history; Andrea Palladio, the architect whose theories have guided designers and builders to the present day; Claudio Monteverdi, whom the authors call “the father of modern music,” who gave the world not only fine operas but also the modern orchestra; Enzo Ferrari, the great automaker; Roberto Rossellini, the often overlooked pioneer of New Wave cinema; and the anonymous Roman engineers who built aqueducts, sewers, and roads that still stand today.

La Merica: Images of Italian Greenhorn Experience St. Joseph and the Triumph of the Saints