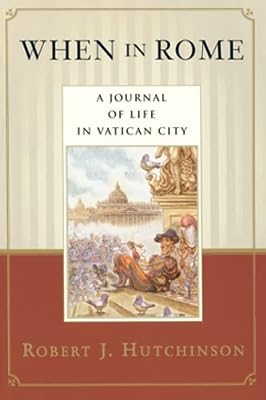 Lighthearted and altogether fascinating, When in Rome is a delightful backstairs tour of one of the world’s most mysterious and eccentric cities. With his wife and three young sons, Robert Hutchinson moved to Rome shortly before his 39th birthday, intending to explore the Vatican in depth. He sought to capture “the personality of the place: the smells and the traffic, the rich delicacies of Roman food, the perils of the Italian language, the way Italian monsignori push their way to the front of the line, just like their lay countrymen.” With playful good humor, Hutchinson introduces the varied and colorful individuals who live and work in the Vatican. In the process, he explores the mysterious orders of medieval knights, some dating back to the First Crusade, which still play a vital role in the Vatican; explains how bumbling Vatican archaeologists found, and then lost, the bones of St. Peter; probes the sex lives of the popes, from the “pornocracy” of Sergius III to the incestuous orgies of Rodrigo Borgia; experiences high fashion in the Holy See, including a visit to the pope’s personal tailor; encounters the weird relics of Catholicism, such as the mummified body of St. Pius X and a museum made entirely out of human bones; recounts the true story behind the True Cross, now kept in a run-down church near the Colosseum; and much, much more. Humorous, irreverent, but ultimately respectful, When in Rome does for the Vatican what A Year in Provence did for the French countryside, in an unforgettable and unprecedented eyewitness account of one of the most fascinating places on Earth.