A House in Sicily 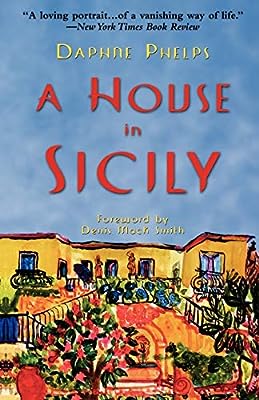 “I had always been a bit of a maverick,” writes Daphne Phelps, looking back on why–at the age of 34–when she unexpectedly inherited a grand house in Taormina, Sicily, she gave up her profession in London, left behind her ordered life with its museums, theater, family and friends, and embarked on a life-long adventure. Reading her intriguing memoir, one is glad Phelps chose the unconventional path: after inheriting her uncle’s Casa Cuseni with its terraced gardens and staggering views of Mt. Etna, she struggles to make ends meet, but instead of selling the estate, opens its doors to a steady stream of paying guests and visitors–many of them artists, writers, and intellectuals.

Inheriting an estate in Italy in 1947 isn’t quite like winning the lottery, it turns out. In short sketches, Phelps reminisces about stepping into small-town Sicilian life, war-weary, speaking very little Italian, and even more scandalous, being unmarried. With her no-nonsense British humor, she recounts the typical conversation with men, young and old:

Settling into daily life at Casa Cuseni, Phelps dons boots and digs into the garden, rolls up her sleeves and cleans the baroque carvings over the salon fireplace, and learns to manage the property and its full-time staff. As she points out in the book’s conclusion, for more than 50 years now, house-related problems have kept her on her toes–those, and her amazingly devoted servant, cook, and even the local Mafia don, whom she all describes with more than a little condescension in a series of deft portraits. While Phelps’s cynicism can be a bit hard to take when she’s serving up her servants, she is, perhaps, at her best when telling stories about her famous houseguests: Bertrand Russell, Henry Faulkner, Tennessee Williams, even Roald Dahl. Some were charming, some were horrid. But the visitors came from 26 countries, with friends introducing their friends. Around the dining room table and in this volume Phelps has mixed people who in “normal life would be unlikely to meet.” It is this Sicilian menagerie–anchored to a singular place and time, and viewed through a British prism–that makes Phelps’s life story so worth the telling.

The Marchesa Fighting the Mafia and Renewing Sicilian Culture