A Thousand Years in Sicily: from the Arabs to the Bourbons

by Giuseppe Quatriglio, translated by Justin Vitiello, In English. 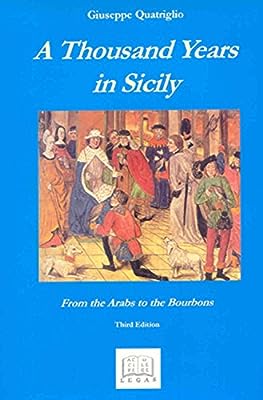 Beginning with the Arab invasion of Sicily in 827 AD, Quatriglio passionately recounts the vicissitudes of a nation whose people, sharing one language, common traditions and customs, have always aspired to independence and self-determination. All conquerors have left traces in the character of Sicilians, but they were never able to eradicate those special qualities (Sicelitude), that unique way of being, shared by all Sicilians. The author is a well-known Sicilian journalist and writer. He earned a degree in jurisprudence in Italy and studied at the Medill School of Journalism of Northwestern University while on a Fullbright Scholarship. During his long and illustrious career, Giuseppe Quatriglio has received numerous awards, including, the Zanotti Bianco, the Goethe, the Marino, the Castiglione di Sicilia, the Solunto, and the Telamone — the last three for Publifoto.

Mille anni di storia, the Italian version of the present book, is perhaps Dr. Quatriglio’s best-known work. It has gone through four editions in Italian and this second English edition is being published contemporaneously with a Japanese language version in Tokyo.