An Irreverent Curiosity: In Search of the Church’s Strangest Relic in Italy’s Oddest Town 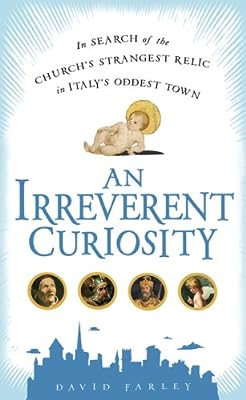 In December 1983, a priest in the Italian hill town of Calcata shared shocking news with his congregation: The pride of their town, the foreskin of Jesus, had been stolen. Some postulated that it had been stolen by Satanists. Some said the priest himself was to blame. Some even pointed their fingers at the Vatican. In 2006, travel writer David Farley moved to Calcata, determined to find the missing foreskin, or at least find out the truth behind its disappearance. Farley recounts how the relic passed from Charlemagne to the papacy to a marauding 16th-century German solider before finally ending up in Calcata, where miracles occurred that made the sleepy town a major pilgrimage destination. Over the centuries, as Catholic theology evolved, the relic came to be viewed as something of an embarrassment, culminating in a 1900 Church decree that allowed the parish to display it only on New Year’s Day. An Irreverent Curiosity interweaves this history with the curious landscape of Calcata, a beautiful and untouched medieval village set atop 450-foot cliffs, which now, due to the inscrutable machinations of Italian bureaucracy, is a veritable counterculture coven. Blending history, travel, and perhaps the oddest story in Christian lore, An Irreverent Curiosity is a weird and wonderful tale of conspiracy and misadventure.

The Day of Battle: The War in Sicily and Italy, 1943-1944 (Liberation Trilogy) Basilica: The Splendor and the Scandal: Building St. Peter’s