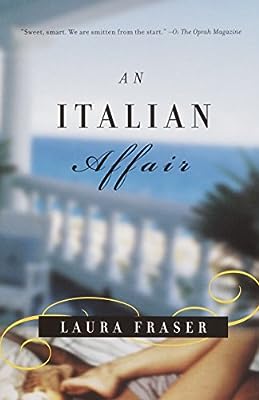 When her husband of one year left her for an old girlfriend, Fraser (Losing It: False Hopes and Fat Profits in the Diet Industry), in her mid-30s and suddenly alone, was devastated. In a state of shock, she decided to take a trip to Italy. Finding no solace with friends in Florence, she traveled to the island of Ischia, where she met M., a married university professor from France with whom she began a casual affair that continued on and off for the next two years. In this gentle memoir, she tells of her rendezvous with her lover in Milan, Lago Maggiore, London, the Aeolian Islands, Morocco and her own city, San Francisco all the places where they carried on their fairy-tale romance, enjoying beautiful scenery, languorous days in the sun, fabulous meals and good sex. The professor, a man of the world who took such liaisons casually, had an easy, humorous, slightly mocking manner that was just what she needed to help her recover from her broken heart. There were no expectations beyond having a good time. “It’s simple,” he told her. “All you need is an older man who can handle you, who will take care of you, who will love to have sex with you.” What M. offered Fraser was far more satisfying and restorative than the psychologically complicated relationships she found in the San Francisco singles scene. Eventually, she was able to get her groove back and even forgive her husband. Writing in the second person, Fraser steps back and looks at the experience without sentimentality, recounting a tender story that gives hope to women with broken hearts.