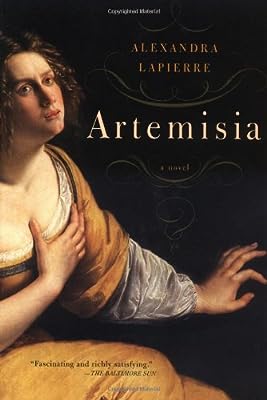 Small wonder that biographer Alexandra Lapierre was drawn to write about Artemisia Gentileschi, one of the first female painters to gain acclaim in the male-dominated 17th-century art world. Her story has all the ingredients of high drama: rape, jealousy, and an infamous court trial set against a backdrop of art and passion. Meticulously researched, framed in a fictional context, Lapierre’s treatment applies a painterly touch to a scholarly work. Billed as a biography in the U.K. but as a novel in the U.S., it combines the rigor of one genre with the page-turning immediacy of the other.

Born in Rome to the artist Orazio Gentileschi and his wife Prudenzia, Artemisia’s life was turned upside down after the death of her mother. Orazio jealously guarded his only daughter, refusing her outside contact even as he taught her the subtleties of painting. At 17, Artemisia, already a skilled artist, was facing a life of spinsterhood as her father’s prisoner. Yet the Gentileschi household was full of the comings and goings of artists whose shifting allegiances were as complex as the politics of the time. When Orazio’s friend, arrogant trompe l’oeil master Agostino Tassi, set his sights on young Artemisia, her refusals only stoked his passion. What followed was rape. Tassi kept her quiet through promises of marriage; when marriage was not forthcoming, Tassi found himself in court.

Even under torture, Artemisia’s statement never wavered, and eventually Tassi was convicted. The mild sentence scarcely harmed him, yet the experience had a lasting effect on his victim. Touched by scandal, Artemisia was able to marry an inferior painter only by virtue of a substantial dowry. Through an unhappy marriage, the deaths of her first children, and the lives of her daughters, however, she continued to paint, eventually gaining considerable acclaim. Interestingly enough, given her experiences, her paintings of religious allegory often portrayed women in illustrations of strength and dominance. If her depiction of Judith violently decapitating Holofernes elicited the Grand Duchess’s repulsion, the Grand Duke Cosimo II was riveted. Others in the room saw the allusion to the artist’s own past: “‘This face, so close to death, brings someone to mind,’ the secretary, Andrea Cioli, interjected insidiously. ‘A painter, your Highness…'”

Artemisia blends storytelling and careful detail in a complex rendering that will particularly appeal to readers with an interest in either Baroque art or Italian history. Color plates illustrate the haunting quality of Artemisia’s work, and the end notes make clear which portions derive from documentation and which are fictional strokes of color. The uninitiated may have a difficult time unraveling the intricacies of characters and politics, perhaps because Lapierre is more at home with scholarship than with fiction. Worse, her breathless prose sometimes tries too hard, even while doing little to reveal her characters’ inner worlds. In the end, it’s both the compelling quality of Artemisia’s story and the lushness of Lapierre’s supporting detail that hold this unusual book together.

Artemisia Gentileschi around 1622: The Shaping and Reshaping of an Artistic Identity (The Discovery Series) The Autobiography of Benvenuto Cellini