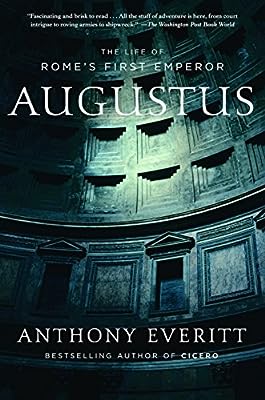 He found Rome made of clay and left it made of marble. As Rome’s first emperor, Augustus transformed the unruly Republic into the greatest empire the world had ever seen. His consolidation and expansion of Roman power two thousand years ago laid the foundations for all of Western history to follow. Yet, despite Augustus’s accomplishments, very few biographers have concentrated on the man himself, instead choosing to chronicle the age in which he lived. Here, Anthony Everitt, the bestselling author of Cicero, gives a spellbinding and intimate account of his illustrious subject.

Augustus began his career as an inexperienced teenager plucked from his studies to take center stage in the drama of Roman politics, assisted by two school friends, Agrippa and Maecenas. Augustus’s rise to power began with the assassination of his great-uncle and adoptive father, Julius Caesar, and culminated in the titanic duel with Mark Antony and Cleopatra. The world that made Augustus–and that he himself later remade–was driven by intrigue, sex, ceremony, violence, scandal, and naked ambition. Everitt has taken some of the household names of history–Caesar, Brutus, Cassius, Antony, Cleopatra–whom few know the full truth about, and turned them into flesh-and-blood human beings. At a time when many consider America an empire, this stunning portrait of the greatest emperor who ever lived makes for enlightening and engrossing reading. Everitt brings to life the world of a giant, rendered faithfully and sympathetically in human scale. A study of power and political genius, Augustus is a vivid, compelling biography of one of the most important rulers in history.

Basilica: The Splendor and the Scandal: Building St. Peter’s The Roman Triumph