Blood Washes Blood: A True Story of Love, Murder, and Redemption Under the Sicilian Sun 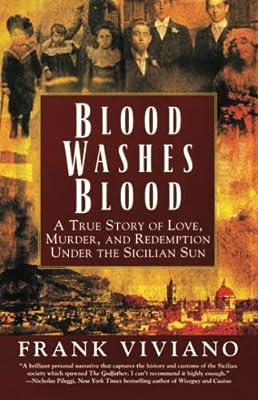 In a land steeped in family tradition, the rootless Viviano (a foreign correspondent for the San Francisco Chronicle) looks to uncover a family secret: how his great-great-grandfather, a man mysteriously known as “the Monk,” was gunned down at a crossroads in rural Sicily more than a century earlier, the victim of an ordered hit. In search of answers, Viviano travels to his ancestral village of Terrasini. He soon discovers that when it comes to the island’s history, there are always two competing versions of the truth: “one lies in the official past, the other in the folk memory and its poetic reincarnation in fable.” His book echoes this sentiment as he intersperses the rather linear account of his investigation with a fictional re-creation of events supported by his findings. Each complements the other, and the book is further enriched as, over the course of his clearly weighty research, Viviano shares a portrait of Sicily and its inhabitants. Of particular interest and, as it turns out, importance are his discoveries about the origin of what has become most strongly associated with the island: the Mafia, or sistema del potere. Viviano is clearly fascinated by it, but his own experiences with carnage as a reporter keep him well clear of any Hollywood glorification. Rather, he traces its evolution as a brutal yet organic power structure in a land traditionally ruled by outsiders. Viviano’s conclusions seem both well reasoned and enticing, as do the results of his inquiry into the story of his great-great-grandfather, a search that comes to a particularly satisfying surprise ending. And while, in its purest form, the book is a solid piece of storytelling and reporting, its greatest strength may be that while it begins as a personal search, it ultimately reveals the history of a people. Viviano’s unsentimental but poignant close-up of one Sicilian family and the role of the Mafia — how it began and how different it has become — will appeal to fans of the equally unsentimental but courageous TV program The Sopranos.