Too Much Tuscan Sun 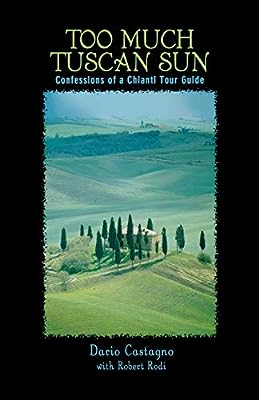 Unlike Under the Tuscan Sun and the flood of cookbooks touting the delights of the Tuscan table, this endearing, lightweight memoir was written by a native of the area. The author recounts the history and character of Chianti—the famous wine region at Tuscany’s geographic and cultural heart—and shares his most unforgettable experiences working as a Chianti tour guide for more than 12 years. Raised in Britain, Castagno began exploring Chianti’s countryside as a teenager and fell in love with its dilapidated farmhouses, abandoned in Italy’s post-WWII period of industrialization; for him, their stone walls, terracotta roofs and chestnut beams formed “well nigh irresistible” windows into Tuscany’s romantic past. As a guide, he shared these journeys with his clients, most of them Americans, including T.T., an overly curious businessman for whom a winery visit “was like taking a child to a chocolate factory”; and an Alabama couple who, sweetly, tried to set Castagno up with their daughter. The farmhouses were also the site of Castagno’s startling encounter with a couple of teenage artists and subsequent discovery about Tonio, a local, 94-year-old love machine. Castagno delivers his life story in simple, honest, heartfelt terms.

A Day in Tuscany: More Confessions of a Chianti Tour Guide 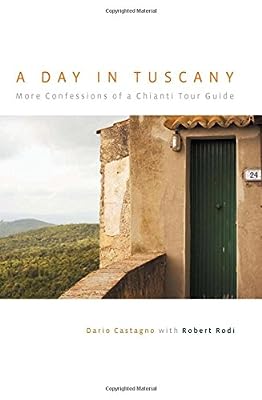 A Day in Tuscany picks up where Dario Castagno’s much-loved, best-selling memoir Too Much Tuscan Sun leaves off—quite literally as the amiable tour-guide-turned-author returns from his first-ever American book tour. As Dario wakes up back in his beloved village after three hectic months in the United States, he sees his surroundings with fresh eyes and reacquaints himself with the rhythms of home: “The day after I returned . . . something magical occurred,” he writes. “As I wandered my home territory, reconnecting with familiar sights, sounds, aromas, and (especially) friends and neighbors, I began to realize just how rich my life here is.”

And so begins his day in Tuscany. Past and present mingle as Dario takes a leisurely stroll around his village, visiting with friends and neighbors, always ready to accept a glass of wine and share stories—of his growing up in Tuscany in the 1970s and his adventures as a tour guide. We meet some of the more remarkable people he has known, including the many locals he gently prods into telling tales of their lives and times. Funny, poignant, intimate, and authentic, and peopled with a rich cast of unforgettable characters, A Day in Tuscany is an enchanting mix of memories from life in Tuscany’s legendary Chianti region—a place where the everyday is still infused with magic.

Too Much Tuscan Wine 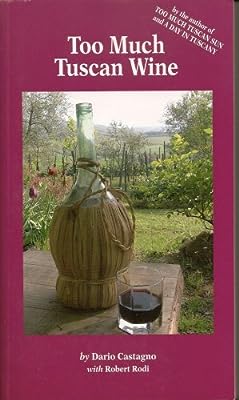 With his third book, Too Much Tuscan Wine, Dario Castagno decants another spellbinding volume about life in a place where the everyday can still be infused with magic and marvel. It follows up 2007’s A Day In Tuscany, and his first book, Too Much Tuscan Sun: Confessions Of A Chianti Tour Guide (2004). The New York Times called that popular title, “an engaging jaunt into the Italian countryside.” Publisher’s Weekly deemed it, “Brain candy to be enjoyed with a bottle of red.” A case of red is in order for Too Much Tuscan Wine, which celebrates the region’s viniculture and those who joyously imbibe it. Vintage Castagno, the memoir is a heady flow of real-life adventures in which copious amounts of “vino rosso” propel the narrative, which begins when he is contacted by “Mia Lane,” an American editor who proposes that he write a book about Tuscan wine. As the manuscript develops, so does the depth of feelings expressed in Dario and Mia’s e-mail correspondence. Part muse, part mystery women, she captures his imagination and eventually his soul when her true identity is revealed. Castagno’s latest overflows with humor, reverie, romance, adventure and a heartfelt toast to Tuscany, where more than the landscape is lush! Each copy of the book can be signed by the author, personally inscribed, upon request with your order. Dario Castagno lives in the Chianti hill town of Vagliagli. Though purely Chiantigiano, he was born in London to Italian parents who were exporting fine Italian wines & spirits to England. Castagno returned to Tuscany at age nine, and embarked on an exploration of the region that forms the heart of his writing. He is also a member of Siena’s Bruco (Caterpillar) contrada and an aficionado of the Palio.

An Osteria in Chianti

“Ultimo is Chianti.”  The truth of these words – and the epic, century-long existence of one man, the inimitable Ultimo Gori – is the essence of An Osteria In Chianti, Dario Castagno’s fourth book.  A native Chiantigiano himself, Castagno delves into the history and character of Tuscany through Ultimo’s extraordinary narrative arc, which begins with his 1908 birth as the 1oth child of an ill-fated sharecropping family eking out a frugal existence in the rock-strewn fields of Chianti Senese.  When Dario initially meets Ultimo in 1983 – after the then-septuagenarian tosses his Vespa into a tree as if it were a sack of wild mushrooms – it is by chance.  But the 25-year friendship that followed was clearly meant to be, in the most profound of ways. Shortly after first encountering Ultimo, Dario also crosses paths with a mysterious and elegant gentleman in a bar. Overhearing Dario’s tale of the rough-hewn Vespa-hurler, the enigmatic stranger gives him an important envelope to deliver back to Ultimo.  He then launches into a spellbinding recantation of Ultimo’s life, his own place in it — and the evolution of Chianti itself. Tales of pre-modern Tuscany, tragically lost family members, unrequited love, friends humble and noble alike, World War II, swapped identity, imprisonment, and redemption cascade together.  They are inter-cut with episodes from Dario’s deepening companionship with Ultimo.  An Osteria In Chianti takes the reader on an irresistible journey that is Chianti.