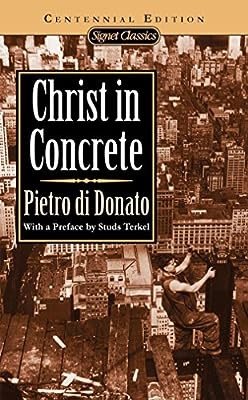 Amazon Reader’s Review: “Christ in Concrete, by Pietro di Donato, is a superb novel of the Italian-American experience. The Signet Classic edition contains a preface by Studs Terkel and a very informative introduction by Fred L. Gardaphe. Terkel notes that the book was first published in 1939, and compares it to John Steinbeck’s Grapes of Wrath. Telling the story of an urban, working-class Italian-American family in the early part of the 20th century, much of the book is focused on Paul, a young man who finds work as a bricklayer. Di Donato writes with a vivid style; he attains a muscular poetry of blood and concrete as he describes the workers’ “symphony of struggle.” He brings to life both the specifics of Italian-American life as well as the larger multicultural world in which Paul’s family lives. The book deals with Italian-American folk beliefs, tenement living, bilingualism, and a young man’s sexual awakening. Di Donato also writes on the theme of the common person’s struggle against uncaring officialdom. He also explores the question of faith in the face of suffering.”