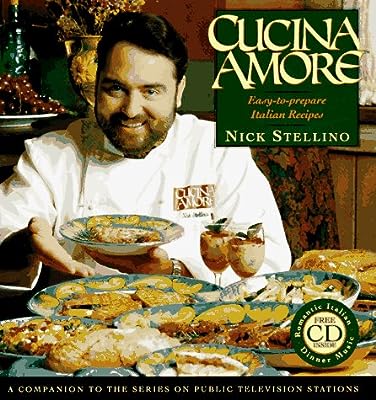 The launch of Nick Stellino’s “Cucina Amore” on public television stations marked the debut of a new kind of television chef and a new style of cooking show. The authentic trattoria setting and casual, relaxed atmosphere allow viewers to feel as if they are actually dining with their host while being entertained with stories about his beloved grandmother, Nonna Maria, his perfectionist father, Don Vincenzo, his mother, Massimilliana, and his brother and partner-in-mischief, Mario–all the while learning how to re-create the authentic Italian dishes he was taught to make at home. This companion cookbook, Cucina Amore, brings you all the warmth, love, and culinary delights that have made Nick Stellino so successful. Here you will find 100 simple and delicious recipes–ranging from Caponata to Wild Mushroom Salad, Ossobuco to Country Style Roasted Potatoes, and Sicilian Cheesecake to Tiramisu–along with all of Nick’s wonderful family memories, and the secrets he has learned both at home and as a professional chef to make the cooking both simple and foolproof. And for the first time in any cookbook, the publishers have included a CD of delightful Italian dinner music to inspire the cook’s creativity and enhance the diners’ pleasure.

Every Night Italian: 120 Simple, Delicious Recipes You Can Make in 45 Minutes or Less Lidia’s Italian Table: More Than 200 Recipes From The First Lady Of Italian Cooking