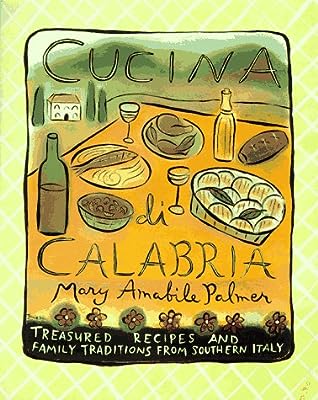 For centuries, one of Italy’s best-kept culinary secrets has been the cooking of Calabria, that region occupying the toe of the Italian boot. But in Cucina di Calabria, Mary Amabile Palmer boldly breaks the silence and introduces an exciting new cuisine to the world. Located just across the Mediterranean from North Africa–not far from Greece and Asia Minor–Calabria has long been the target of invasion and occupation; whatever the political fallout of such incursions, Calabrian cooking is all the richer for the introduction of foreign cuisine and ingredients (olives from the Greeks; eggplants and pine nuts from the Arabs)–that contribute a succulent and daring mélange of taste and texture. In addition to the recipes themselves, Mary Amabile Palmer, a first-generation Italian American, includes anecdotes about Calabrian culture, history, traditions, and festivals, as well as recollections from her childhood. These delightful snippets provide context to the more than 200 Calabrian dishes detailed in Cucina di Calabria, making the book as much fun to read as it is to cook from.

Food and Memories of Abruzzo: The Pastoral Land Flavors of Puglia: Traditional Recipes from the Heel of Italy’s Boot