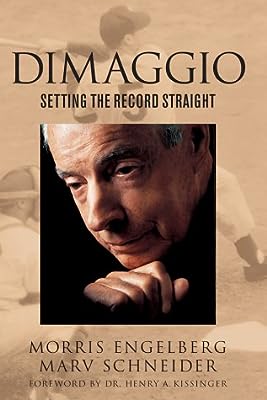 Morris Engelberg was Joe DiMaggio’s best friend and constant companion over the last 16 years of DiMaggio’s life. This book combines anecdotes from DiMaggio’s playing days with an extensive account of his relationship with his family, including Joe Jr., who finally succumbed to a life spent battling alcohol and drug addiction, and Marilyn Monroe, who was the true love of DiMaggio’s life. The DiMaggio Engelberg knew was a man whose fame made him suspicious of those who would be his “friends” and who was seldom unaware of the image–cool, sophisticated, and graceful–he needed to protect. But he was also intelligent, compassionate, a good friend, and a doting, attentive grandfather. It was in the latter role that he found the most joy late in life. Engelberg has been criticized for exploiting his friendship with DiMaggio. Anyone who reads this book will dismiss the thought out of hand. There’s nothing here to diminish DiMaggio’s reputation. No one sets out to become a legend; it can be a troublesome burden. DiMaggio handled it better than most