Excellent Cadavers: The Mafia and the Death of the First Italian Republic 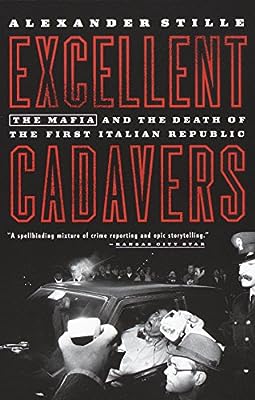 In Sicily, “excellent cadavers” are Mafia victims who also happen to be government officials. Excellent Cadavers is full of them, notably the courageous and tenacious prosecutors, Giovanni Falcone and Paolo Borsellino. Throughout the 1980s, Falcone and Borsellino brought down more heat on the “men of honor” than anyone since Mussolini’s handpicked “Iron Prefect.” The two not only sent hundreds of gangsters to jail, they also exposed Mafia corruption of national political leaders that led to the indictments of two of Italy’s best-known politicians, Bettino Craxi and Guilio Andreotti. The success of their investigations brought on reprisals by corrupt politicians designed to weaken police and prosecutors alike and ultimately led to their deaths. Falcone and Borsellino were assassinated by bombs in 1992, but their work brought to light revelations that are rattling the current Berlusconi administration. Stille has crafted an excellent book, deftly weaving complex threads of information about Italian, Sicilian, and Mafia history, Italian politics, and Italian jurisprudence into a highly readable narrative.

Italy in Mind: An Anthology (Vintage Departures) Playing Away: Roman Holidays and Other Mediterranean Encounters