Galileo’s Daughter: A Historical Memoir of Science, Faith, and Love 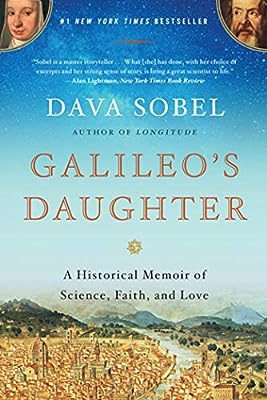 Everyone knows that Galileo Galilei dropped cannonballs off the leaning tower of Pisa, developed the first reliable telescope, and was convicted by the Inquisition for holding a heretical belief–that the earth revolved around the sun. But did you know he had a daughter? In Galileo’s Daughter, Dava Sobel (author of the bestselling Longitude) tells the story of the famous scientist and his illegitimate daughter, Sister Maria Celeste. Sobel bases her book on 124 surviving letters to the scientist from the nun, whom Galileo described as “a woman of exquisite mind, singular goodness, and tenderly attached to me.” Their loving correspondence revealed much about their world: the agonies of the bubonic plague, the hardships of monastic life, even Galileo’s occasional forgetfulness (“The little basket, which I sent you recently with several pastries, is not mine, and therefore I wish you to return it to me”).

While Galileo tangled with the Church, Maria Celeste–whose adopted name was a tribute to her father’s fascination with the heavens–provided moral and emotional support with her frequent letters, approving of his work because she knew the depth of his faith. As Sobel notes, “It is difficult today … to see the Earth at the center of the Universe. Yet that is where Galileo found it.” With her fluid prose and graceful turn of phrase, Sobel breathes life into Galileo, his daughter, and the earth-centered world in which they lived.

The Prettiest Love Letters in the World: Letters Between Lucrezia Borgia & Pietro Bembo, 1503-1519 The Lives of the Artists (Oxford World’s Classics)