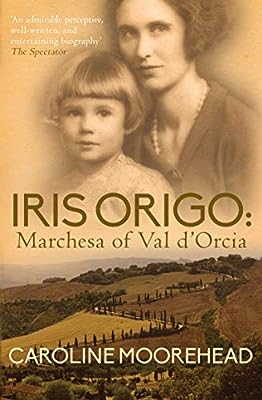 Eagerly exchanging an existence of idle privilege and social intrigue for one of hard work and literary distinction, Origo led a life characterized by vitality and commitment. Born in 1902 into a wealthy American family, she and her British mother permanently left the U.S. after the untimely death of her father in 1910. Traveling extensively throughout Europe, they eventually settled outside of Florence, becoming prominent members of the stuffy Anglo-Florentine community of expatriates. Asserting her trademark independence, she married Antonio Origo, the illegitimate son of a cavalry officer-sculptor. Together Antonio and Iris purchased and totally revitalized an arid Tuscan valley and renovated a crumbling estate. With virtually no experience and few practical skills, they transformed themselves into agrarian pioneers and their extensive acreage into a prosperous working community supporting more than 200 people. During the war years, they quietly supported the Allies, offering refuge to countless numbers of partisans and prisoners of war. In addition to these accomplishments, Iris also buried one child and raised two more, conducted several heart-wrenching extramarital affairs, and distinguished herself as both a biographer and a literary critic. Moorehead has exquisitely captured the energy and the essence of an aristocrat resolutely committed to her land, her craft, and her nontraditional lifestyle. A magnificent biography, so absorbing and so full of fascinating characters and descriptive details that it reads like fiction.

Peking to Paris, An Account of Prince Borghese’s Journey Across Two Continents in a Motor-Car The Cielo: A Novel of Wartime Tuscany