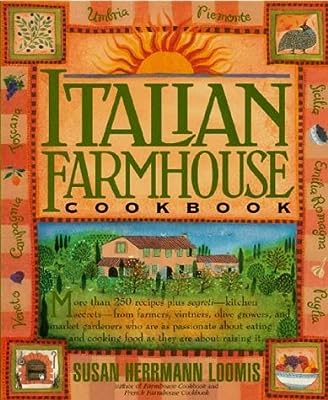 For the third book in her farmhouse series, Loomis traveled all over Italy, meeting and talking with vintners, cheese makers, olive growers, balsamic vinegar makers, and farmers, gathering delicious recipes and picking up invaluable culinary secrets, or segretos. There are Stuffed Sage Leaves from Tuscany, Lush Tomato Salad from Sicily, Pasta with Fava Beans and Basil from Liguria, Braised Artichokes from the Amalfi peninsula, and more. Thoughtful wine suggestions are included with many recipes, and there are dozens of boxes and sidebars about the people Loomis met and all sorts of other topics. Lynne Rosetto Kasper explored some of this same territory in The Italian Country Table. In fact, some of the same people are mentioned in both books. Loomis, whose ties are more to France, lacks Kasper’s authority on the subject; however, she ventured farther afield than Kasper and her recipes represent a greater range of Italy’s regional cooking. With its 200 simple but mouthwatering recipes, readable and informative text, and charming illustrations, her book is highly recommended.

Verdure: Simple Recipes in the Italian Style The Dictionary of Italian Food and Drink: An A-To-Z Guide With 2,300 Authentic Definitions and 50 Classic Recipes