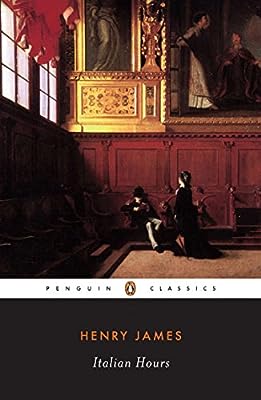 Amazon Reader’s Review: “The films Room With a View and Wings of the Dove make one wonder about the Italy reflected in classical paintings executed before the destruction of WWII. My curiosity was heightened in an art history class when the instructor showed a photo slide of the Ponte Vecchio and told the amazing story of the Nazi pilot who disobeyed orders to destroy the last bridge the allies could cross on their advance north. This beautiful book brings to mind the saying, “The Past is a Foreign Country.” Italy of the 19th Century is a place none of us can know except through records left by one who witnessed it. The book consists of essays James wrote on his travels to various places in Italy including Venice, Rome, and Florence. He visited some places several times and the text reflects the changes he observed on revisits.

He records an Italy whose poverty for a time prevented the intrusion of developers, who later made many changes perhaps for the worse. James was not a worshipper of old buildings, he appreciated them, but he was also aware of the suffering of the Italians, many of whom existed in dire poverty. His reflections on various cathedrals, churches and other objects of artistic interest are humanized by his comments about the individuals he encounters. He muses on the morality of travel, “whether it has been worthwhile to leave his home [and] encounter new forms of human suffering.” His awareness of the Italians themselves makes his writing a bit like that of Paul Theroux, a traveler and writer in our times. James differs from Theroux however. My sense is that James is a little less likely to criticize and a little more willing to overlook unpleasantness. Perhaps that makes him less of a realist, or perhaps Italy was a more pleasant place in the 19th Century.”