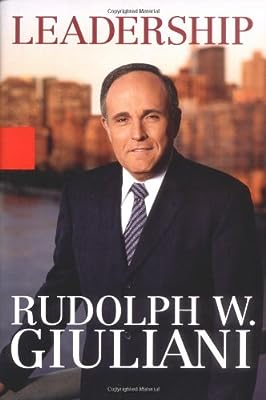 This highly anticipated book from New York’s once controversial, now beloved former mayor opens with a gripping account of Giuliani’s immediate reaction to the September 11 attacks, including a narrow escape from the original crisis command headquarters, and closes with the efforts to address the aftermath during his remaining four months in office. But, he argues, he did not suddenly become a great leader on September 11, and “had been doing [my] best to take on challenges my whole career.” The bulk of the book draws on his experiences as a corporate lawyer and U.S. attorney and then as mayor. The leadership principles he champions preparation, accountability and strong self-definition chief among them come as no surprise, but the stories he uses as examples are filled with vivid scenes and organized with a veteran trial lawyer’s flair for maximum effect. Apart from a few childhood anecdotes, he shies away from his personal life and recalls his abandoned Senate campaign against Hillary Clinton only as one factor in his decisions about dealing with prostate cancer. Throughout, he displays the hands-on management that marked his administration, including his willingness to respond swiftly and in person to crises, to prove that he could be relied on when the city needed him most. While some critics found his style too aggressive, he has an effective counterargument: “Before September 11, there were those who said we were being overly concerned [about security],” he observes. “We didn’t hear that afterwards,” he observes. “We didn’t hear that afterwards.”

Sometimes I Dream in Italian Italian Pride: 101 Reasons to Be Proud You’re Italian