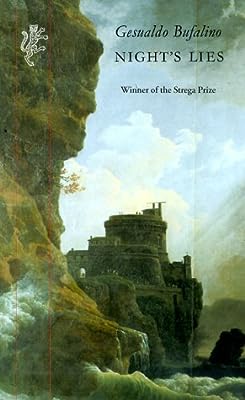 Amazon Reader’s Review: “If you know you are to die tomorrow, how would you spend the last night of your life? The same dilemma troubles four political prisoners, a baron, a soldier, a poet, and a student in Gesualdo Bufalino’s Night’s Lies. On the last night before they go under the guillotine for plotting against the Bourbon monarchy, the four characters review their lives. Is it more betrayal and regret? Or do they find vindication in confession?

Night’s Lies is good story-telling. This tale is a brilliant execution of setting, characterization, narrative, and irony. The setting parallels the moral and spiritual exile of the prisoners. Set in a remote fortress on an inhospitable island that “is known as an island but ought to be called a rock. For it is nothing more than a stack of volcanic tufas heaped up into the form of an enormous snout, wearisomely steep in places, but for the most part bare, sheer crag”. “As by a tortuous path you clamber up, your eye embraces on the one hand the immensity of the open sea, an infinite reach of blue to the western horizon; on the other, beyond the neck of water, there is the mainland, where you glimpse a harbour, a crescent of dwarf houses; but neither man nor motion.”

The man who holds part of the key to their destinies is Consalvo De Ritis, the Governor, who strikes a deal with the prisoners. If one of them should anonymously name their leader by sunrise, then all of them would be freed. If not, all of them hang. They are placed in a small room for the night.

Ingafu, the Baron; Saglimbeni, the Poet; Agesilaos, the Soldier; and Narcissus, the Student narrate in turn their own tales of intrigue, love, lust, violence, jealousy, honour, and twists of fate. They seem to be trying to convince not only the others but also themselves of the sense and purpose of their lives, all knowing that death awaits them in one form or another.

Do they betray their leader but lose their own souls? Or do they find some way to escape their fate? Night’s Lies is an intriguing tale that evokes the danger and relief of holding a mirror to our lives and wondering what it all means. Just the ending in itself is worth the read.”