On Persephone’s Island: A Sicilian Journal 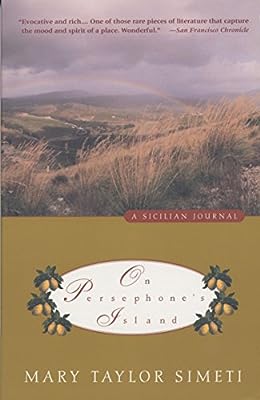 Mary Taylor Simeti arrived in Sicily in 1962 to do volunteer work. Freshly graduated from Radcliffe College after growing up in a privileged New York City family, the last thing she expected was to fall in love and marry a Sicilian. The book recounts the events of 1983, the year Simeti turned 42. Her narrative alternates between Palermo, where her husband Tonino is a professor of agricultural economy, and the countryside of Bosco, 30 miles away, where she shoulders demanding responsibilities on the working farm that has belonged to her husband’s family for three generations. Filled with rich helpings of Sicilian history and culture with events and insight, Simeti makes observations about the complexity of changing times in a society where the persistent reliance on feudal relationships and agriculture is finally crumbling. She describes the religious festivals at which celebrants tidy up their family tombs and make archangels dance in the village piazza. Tales like these, along with the myriad sights, flavors, and fragrances of Sicily, burst from the pages of this gem.

The Stone Boudoir, Travel through Hidden Villages of Sicily The Little Jesus of Sicily