On the Road with Francis of Assisi – A Timeless Journey Through Umbria and Tuscany, and Beyond 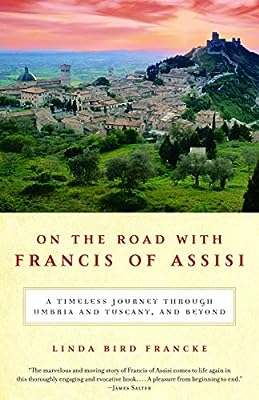 Francke (Ground Zero; Growing Up Divorced) invokes the legendary 13th-century saint as a spiritual tour guide of Italy, tracing Francis’s footsteps to illuminate his spiritual and physical journey to sainthood. Submerged in the region’s rich history, Francke traverses the country as Francis did for 20 years, lingering in Assisi (his birthplace), Venice and Rome, visiting chapels and devotional spaces bearing relics of his life or visual homage to the myths he inspired. Her vivid reimaginings create a window into Francis’s life, which is blessed with an intriguing backstory that Francke skillfully revives in scenes of drama, despair and passion, as when Francis stridently severs ties with his father to a tittering crowd while “in the buff.” She also lavishes attention on St. Clare, the feverishly devout nun who submits to the Franciscan order and falls desperately in love with its leader. Francke peppers her reverent yet witty account with local color and amusing anecdotes that usher history into the present, noting, for instance, that Peter Jennings kept on his desk a statue of St. Clare, as her miraculous witnessing of a Christmas church service marked history’s “first live broadcast.”

The Road To Assisi: The Essential Biography of St. Francis Fortune Is a River: Leonardo Da Vinci and Niccolo Machiavelli’s Magnificent Dream to Change the Course of Florentine History