Pilgrimage: A Chronicle of Christianity Through the Churches of Rome 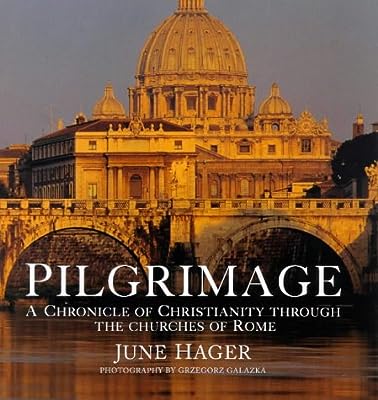 Rome is famous as the capital of Christianity and the “city of a thousand churches.” With a fresh perspective on the history of the Roman Catholic church recounted for the millennial jubilee, visit forty sacred buildings, from the ancient catacombs to the most recent churches raised in the sprawling suburbs, and become swept up in the stories of each one: S. Stefano Rotondo, built to honor Christianity’s first martyr, has close and mysterious associations to Christ’s own tomb in Jerusalem; S. Maria Sopra Minerva is filled with art treasures and the ghosts of protagonists from medieval Rome; S. Andrea al Quirinale, with its oval shape, theatrical altar, and splendid dome, epitomizes the Baroque at its height. End with the origins of jubilees and the churches dedicated to them. Plus an introduction by Pope John Paul II’s chosen deputy for the Great Jubilee.

Here’s one reader’s review:
“All of you, whether you can get to Rome for the Giubileo next year or not, should have this book. Everyone who can come to Rome in 2000 should get a copy now and start studying it. I read through “Pilgrimage” immediately on its delivery and started my second reading, after a short night’s sleep, a few hours later. Walking, book in hand, I revisited Il Gesu and S. Maria Sopra Minerva near the Pantheon with new understanding and seeing with new eyes. Those of us who are lucky enough to live in Rome have visited many churches, but most of us have seen only their surfaces. What a pleasure it was (and will continue to be) to visit them again and really know what we are seeing. There are not enough superlatives for this book. It is definitely not another grim guide that tells which statue is where and who’s in every sarcophagus. Here we get clear and careful analysis — how and why the churches were built and then restored and redecorated, what they meant to their Catholic communities, and some clues about what they can mean to us. The text is accurate and insightful and to say that the photos are sumptuous would be a vast understatement. We’ve been waiting for years for this book. There is no other with which to compare it, but how wonderful that the first of its kind is a masterpiece.”

Love and Death in Renaissance Italy Murder in Italy: The Shocking Slaying of a British Student, the Accused American Girl, and an International Scandal