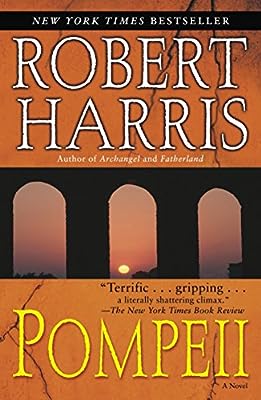 In this fine historical novel by British novelist Harris (Archangel; Enigma; Fatherland), an upstanding Roman engineer rushes to repair an aqueduct in the shadow of Mount Vesuvius, which, in A.D. 79, is getting ready to blow its top. Young Marcus Attilius Primus becomes the aquarius of the great Aqua Augusta when its former chief engineer disappears after 20 years on the job. When water flow to the coastal town of Misenum is interrupted, Attilius convinces the admiral of the Roman fleet – the scholar Pliny the Elder – to give him a fast ship to Pompeii, where he finds the source of the problem in a burst sluiceway. Lively writing, convincing but economical period details and plenty of intrigue keep the pace quick, as Attilius meets Corelia, the defiant daughter of a vile real estate speculator, who supplies him with documents implicating her father and Attilius’s predecessor in a water embezzlement scheme. Attilius has bigger worries, though: a climb up Vesuvius reveals that an eruption is imminent. Before he can warn anyone, he’s ambushed by the double-crossing foreman of his team, Corvax, and a furious chase ensues. As the volcano spews hot ash, Attilius fights his way back to Pompeii in an attempt to rescue Corelia. Attilius, while possessed of certain modern attitudes and a respect for empirical observation, is no anachronism. He even sends Corelia back to her cruel father at one point, advising her to accept her fate as a woman. Harris’s volcanology is well researched, and the plot, while decidedly secondary to the expertly rendered historic spectacle, keeps this impressive novel moving along toward its exciting finale. Review copyright 2003 Reed Business Information, Inc.

Escape From Pompeii Pompeii: The History, Life and Art of the Buried City