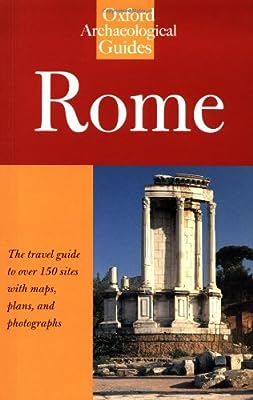 The city of Rome is the largest archaeological site in the world. If your idea of a good Roman holiday is uncovering the archaeological mysteries of the Roman Empire, then Oxford Archaeological Guides: Rome is your ideal guidebook. For such a detailed guide, this book is remarkably readable. Of the Field of Mars (Campus Martius), Claridge writes, “It is the one part of Rome which continued to be quite densely inhabited after the C9 AD, becoming the center of the late medieval and Renaissance city, and is still densely inhabited today, an extraordinary blend of past and present even for Rome. The Stock Exchange occupies a Roman temple, the boiler-rooms of the offices of the Senate are set in the ruins of Roman thermal baths, a modern theatre nestles in the shell of a Roman theatre. Many of the streets are on the lines of ancient streets, and the walls of the buildings on either side of them are often balanced directly on top of Roman walls.” Among this Oxford guide’s special features are 200 site plans, maps, diagrams, and photographs; a cultural and historical overview; a chronological overview; and a glossary of essential terms. It uses star ratings to help you plan your days and divides Rome into 12 main areas: the Roman Forum, Upper Via Sacra, Palatine Hill, Imperial Forums, Campus Martius, Capitoline Hill, Circus Flaminius to Circus Maximus, Colosseum Valley and Esquiline Hill, Caelian Hill and the Via Appia, other sites, museums, and catacombs. Shaded sidebars add anecdotal interest, covering issues such as the Seven Hills, Jupiter’s Dining Room, Tomb of Bibulus, the “Province” Reliefs, Madam Lucretia, Nero’s New Palace, and Gladiatorial Shows.

Eyewitness Travel Guide to Rome The Heritage Guide Naples: The City and Its Famous Bay, Capri, Sorrento, Ischia, and the Amalfi Coast Down to Salerno (Heritage Guides)