The Bishop’s Palace: Architecture and Authority in Medieval Italy 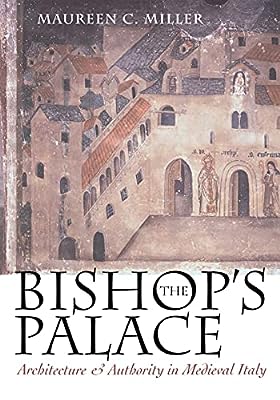 This lavishly illustrated book looks at the art and architecture of episcopal palaces as expressions of power and ideology. Tracing the history of the bishop’s residence in the urban centers of northern Italy over the Middle Ages, Maureen C. Miller asks why this once rudimentary and highly fortified structure called a domus became a complex and elegant “palace” (palatium) by the late 12th century. Miller argues that the change reflects both the emergence of a distinct clerical culture and the attempts of bishops to maintain authority in public life. She relates both to the Gregorian reform movement, which set new standards for clerical deportment and at the same time undercut episcopal claims to secular power. As bishops lost temporal authority in their cities to emerging communal governments, they compensated architecturally and competed with the communes for visual and spatial dominance in the urban center. This rivalry left indelible marks on the layout and character of Italian cities. Moreover, Miller contends, this struggle for power had highly significant, but mixed, results for western Christianity. On the one hand, as bishops lost direct governing authority in their cities, they devised ways to retain status, influence, and power through cultural practices. This response to loss was highly creative. On the other hand, their loss of secular control led bishops to emphasize their spiritual powers and to use them to obtain temporal ends. The coercive use of spiritual authority contributed to the emergence of a “persecuting society” in the central Middle Ages.

The Feud That Sparked the Renaissance: How Brunelleschi and Ghiberti Changed the Art World Art and Life in Renaissance Venice