The Charterhouse of Parma (Modern Library) 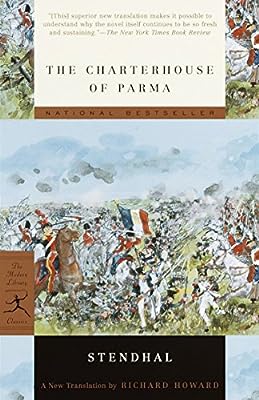 Officer, diplomat, spy, journalist, and intermittent genius, Marie Henri Beyle employed more than 200 aliases in the course of his crowded career. His most famous moniker, however, was Stendhal, which he affixed to his greatest work, The Charterhouse of Parma. The author spent a mere seven weeks cranking out this marvel in 1838, setting the fictional equivalent of a land-speed record. To be honest, there are occasional signs of haste, during which he clearly bypassed le mot juste in favor of narrative zing. So what? Stendhal at his sloppiest is still wittier, and wiser about human behavior, than just about any writer you could name. No wonder so meticulous a stylist as Paul Valéry was happy to forgive his sins against French grammar: “We should never be finished with Stendhal. I can think of no greater praise than that.”

The plot of The Charterhouse of Parma suggests a run-of-the-mill potboiler, complete with court intrigue, military derring-do, and more romance than you can shake a saber at. But Stendhal had an amazing, pre-Freudian grasp of psychology (at least the Gallic variant). More than most of his contemporaries, he understood the incessant jostling of love, sex, fear, and ambition, not to mention our endless capacity for self-deception. No wonder his hero, Fabrizio de Dongo, seems to know everything and nothing about himself. Even under fire at the Battle of Waterloo, the young Fabrizio has a tendency to lose himself in Napoleonic reverie:

Suddenly everyone galloped off. A few moments later Fabrizio saw, twenty paces ahead, a ploughed field that seemed to be strangely in motion; the furrows were filled with water, and the wet ground that formed their crests was exploding into tiny black fragments flung three or four feet into the air. Fabrizio noticed this odd effect as he passed; then his mind returned to daydreams of the Marshal’s glory. He heard a sharp cry beside him: two hussars had fallen, riddled by bullets; and when he turned to look at them, they were already twenty paces behind the escort.

The quote above, a famous one, captures something of Stendhal’s headlong style. Until now, most English-speaking readers have experienced it via C.K. Scott-Moncrieff’s superb 1925 translation. But now Richard Howard has modernized his predecessor’s period touches, streamlined some of the fussier locutions, and generally given Stendhal his high-velocity due. The result is a timely version of a timeless masterpiece, which shouldn’t need to be updated again until, oh, 2050. Crammed with life, lust, and verbal fireworks, The Charterhouse of Parma demonstrates the real truth of its creator’s self-composed epitaph: “He lived. He wrote. He loved.”