The Foods of Sicily & Sardinia and the Smaller Islands 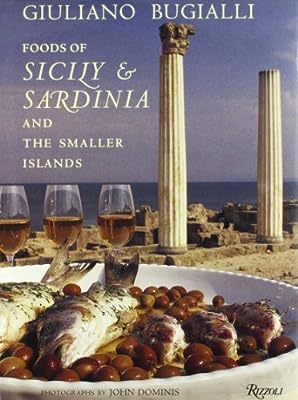 Charting watery frontiers of authentic Italian cuisine, Bugialli (The Foods of Tuscany) island-hops to observe ancient Roman culinary traditions steeped in encounters with Greek, Phoenician, French, Spanish and other historic trespassers. The galvanic flavors retrieved justify his every stopover. Claiming that Sicily and Sardinia boast Italy’s most varied antipasti, Bugialli offers Swordfish or Tuna Marinated in Aromatic Herbs (lemon verbena, mint, basil, parsley, sage, rosemary, oregano and capers) and Grilled Eggplant in Salmoriglio, a sauce of anchovies, garlic, rosemary and sage. Sicilian Pesto fuses tomatoes, almonds, garlic, basil, parsley and mint. On the tiny island of Favignana, he finds Pasta Baked in a Squid. Some dishes specify homemade pasta, which may scare off many home cooks; Polenta with Sausages, Sardinian Style, asks for 55 minutes of pot-stirring, a long stretch even for old polenta hands. But simple recipes, like Fava Bean Soup with spinach and pancetta or prosciutto, are also offered. Lemon-Flavored Ossobuco with Cannellini Beans from Elba is particularly seductive, as is Chicken with Hot Green Peppers. Expectedly, seafood dishes excel with dishes like Shrimp in Tomato/Caper Sauce and Fresh Tuna in Savory Vinegar Sauce. So too do vegetables (String Beans in Garlic Sauce; Savory Squash Torte). Breads include Sardinia’s classic Carta da Musica (Music Paper Bread). Dominis’s lush photos portray the islands, their marketplaces and traditions with remarkable immediacy.

The Sicilian Gentleman’s Cookbook Sweet Sicily: The Story of an Island and Her Pastries