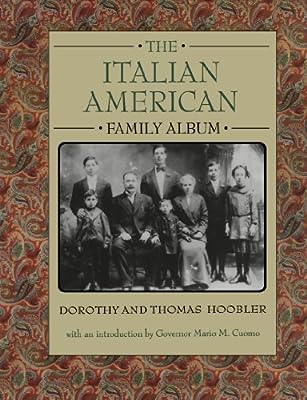 Against all odds — a new language, new customs, and the ethnic slurs and catcalls of prejudice — Italian Americans paved the streets, rolled the cigars, sewed the clothes, cooked the meals, and did all manner of back-breaking work to build a new life in Lamerica, the land of success. The Italian American Family Album brings us into the heart of those immigrants’ experiences. Through diaries, letters, interviews, and articles from magazines and newspapers we share the ordeals and the triumphs of the Italian American first setting foot on his new homeland. These personal accounts and family photographs of scores of Italian American families tell inspiring and courageous stories of hardship and suffering. In the late 19th and early 20th century, the journey across the Atlantic was remembered by many as the via dolorosa, the “sorrowful way.” And even after arriving in the new homeland and successfully getting through immigration, finding a job and a place to live, and learning new ways of doing almost everything was a challenge. But there was joy in the new country, as well. The new arrivals were embraced by a community of fellow Italians with a grand sense of humor, an intense appreciation of music, and an even greater appreciation of good food. Life for the newcomer was full of old traditions and pleasure, and we hear first-hand how the old ways endured even as new philosophies and customs were embraced daily. Through the stories of the children of those early immigrants — writers Gay Talese and John Ciardi, entertainers like Tony Bennett, baseball great Yogi Berra, and others not famous, but still proud to call themselves Italian Americans — we see how family pride and strong ties to the old country survive even today.

Ships of Our Ancestors Netting Your Ancestors: Genealogical Research on the Internet

1800 Kilometers in a FIAT 500: Our Italian Genealogical Odyssey