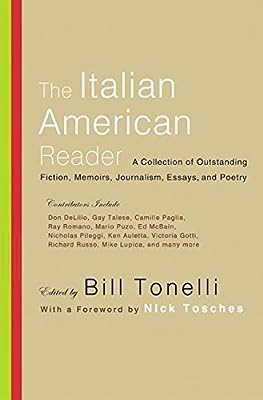 Tonelli, a former editor at Esquire and Rolling Stone magazines and author of The Amazing Story of the Tonelli Family in America, offers this personal and solid compendium of Italian-American voices. After enumerating the accomplishments of other Italian-American artists (singers, musicians, actors, film directors), Tonelli compares these highlights with those of other immigrants and asks whether Italians, in fact, need to be recognized for literary accomplishments. The answer is yes, and Tonelli thematically arranges 68 stories, poems and excerpts from memoirs and novels by such categories as “Home,” “Mom,” “Work” and “Death.” The selection of contributors (some dead, most still writing) is anything but perfunctory, and none of the selections gives a stereotypical picture of Italian-Americans (in fact, several contributors even refuse to identify themselves by ethnicity). The book opens with a section from Don DeLillo’s Underworld and includes a piece each by Evan Hunter and Ed McBain (who are one and the same, of course). Kim Addonizio and Tom Perrotta have pieces under “Sex, Love, and Good Looks”; no tome of Italian-American literature would be complete without Camille Paglia, Gay Talese, John Fante and Pietro DiDonato. While Tonelli doesn’t shy from stories about or figures of the Mafia (Nick Pileggi contributes a section of Wiseguys, as does Victoria Gotti from Superstar), Mario Puzo’s only piece is from his first, under-appreciated novel, Fortune’s Pilgrim, about the immigrant experience. Nick Tosches sets the tone of this beautiful volume with a bold homage to the granddaddy of Italian-American literature, Emanuele Conegliano, better known as Lorenzo Da Ponte, the librettist for La nozze di Figaro, Don Giovanni and Così fan tutte.