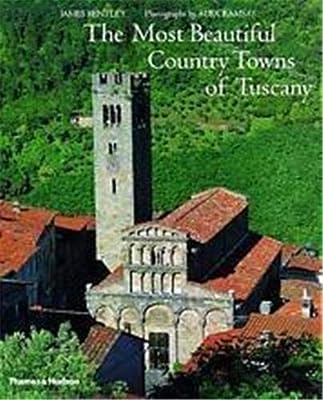 Author of the highly successful The Most Beautiful Villages of Tuscany, James Bentley, with photographer Alex Ramsay, has now turned his attention to the equally beautiful towns of Tuscany. Traveling from north to south, as in the Villages volume, we encounter first the towns with substantial Etruscan and Romanesque features, then the walled towns of central Tuscany, followed by the coastal and thermal communities of the south. The country towns described and photographed in this book have been selected not only to exemplify the remarkable variety of this part of Italy but also because they embody its exceptional artistic and architectural heritage. There are works by Luca della Robbia and Donatello in Impruneta; Piero della Francesca was born in Sansepolcro. The architects of the Renaissance have left many masterpieces as well, often under the patronage of powerful local families: Michelozzo built the Villa Medici near Fiesole, while Giuliano da Sangallo designed the Medici fortress at Sansepolcro. Other aspects of the cultural heritage of these towns are more ancient: Volterra has the remains of Etruscan walls, and the Romans used the thermal springs at Chianciano Terme. A noted characteristic of Tuscan towns is their gastronomy. The wines of Chianti are well-paired with the beef of the Chiana Valley, while bread is justly celebrated in the area around Montecatini. Other markets feature non-gastronomic delights: alabaster in Volterra, flowers in Pescia, books in Pontremoli. Twenty of the most beautiful towns of this opulent land are treated in this visual and textual feast by Alex Ramsay and James Bentley, which is completed by a guide to the principal sites, events, hotels, and restaurants of each town. 273 color illustrations.

The Most Beautiful Villages of Tuscany Umbria: Italy’s Timeless Heart