The Road To Rome: A Modern Pilgrimage 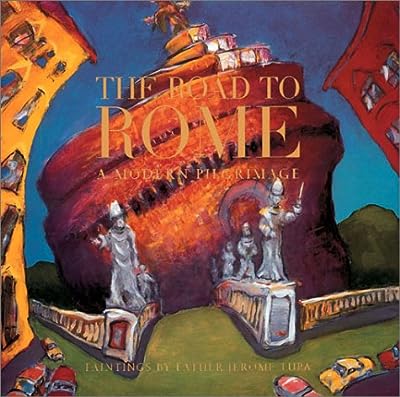 When Father Jerome Tupa embarked on his Italian pilgrimage in the summer of 1999, he did so as a painter and a monk. With the heart of a priest and the hand of an artist, he experienced the essence of one of the world’s most spiritual regions. Beginning in Milan and ending in Rome, Father Tupa retraced the steps of the pilgrims, drawing and painting the sacred imagery he encountered along the way. The outcome was a stunning collection of works in oil, watercolor, pen, ink, and pencil, many of which are included here in The Road to Rome. Although the pilgrimage is steeped in religious tradition and history, the art of Father Tupa is boldly original and undeniably modern. Painted in colors that explode with intensity, the architecture depicted by Father Tupa bends and reaches across the canvas with life and vitality. From the sunflowers of Urbania to the domes of Padua, Father Tupa paints Italy as you may have felt but have never seen before. How startling and ever more interesting does this journey become when you consider how limited spiritual art has been during the past century. Rothko’s chapel and Matisse’s chapel are highlights, with little company until now. Tupa’s opulent oil paintings and lyrical watercolors and sketches are accompanied by Francisco Schulte’s deeply informed text exploring the history and significance of each stop along the pilgrimage. A personal context is added through the inclusion of entries from Father Tupa’s own travel journal. Whether he is sharing the story of how he met the pope or describing the experience of painting Rome’s ancient Forum, he becomes a superb guide allowing readers to relive the pilgrimage as if they too were traveling through the Italian landscape. Every chapter is gracefully introduced with a prayer, written by the artist in praise of each location along The Road to Rome. Join Father Tupa and take a profound journey of the spirit as witnessed through the eyes of a very wise man and gifted artist.