The Seasons of Rome: A Journal 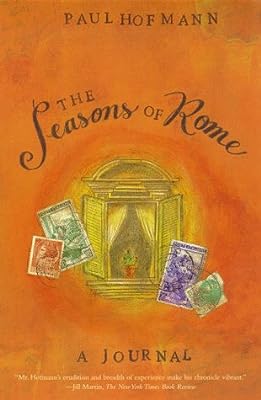 Delightful insights into the Eternal City. Fleeing Hitler’s invasion and arriving in Rome from his native Vienna in 1938, Hofmann made Italy his home for the rest of his life. Former bureau chief for the New York Times, he is a prolific travel writer, best known to Italianists as the author of Rome: The Sweet Tempestuous Life (1982), O Vatican (1983), Cento Città (1988), and That Fine Italian Hand (1990). Like these previous works, The Seasons of Rome is a light, breezy account of a year in that bewildering, beguiling, and often exasperating city. Like most travel literature–and like the Romans themselves–Hofmann’s book refuses to take itself too seriously, and therein lies its charm. At times he sounds like the neighborhood curmudgeon, complaining about left-wing students, motor scooters, and the Democratic Party of the Left (the former Communist Party). Tellingly, Hofmann confesses that he does not consider himself a Roman by adoption–even after more than half a century in the city. Rather, he is “still a foreign observer with my inevitable prejudices. . . .” But it’s precisely this distance that allows him to reveal the foibles, folly, and even nobility of that ancient/modern Roman race. Each chapter is devoted to a month of the year, and we realize how intimately tied the Romans are to their climate, whether the wind that dumps sand from the Sahara on their city or the late summer rains that bring relief from the heat. Above all else, the author reveals how the Romans define the Italian arte di arrangiarsi, or the art of getting by; from avoiding paying their utility bills to dealing with local politics. The next best thing to actually being in Rome.