The Stone Boudoir, Travel through Hidden Villages of Sicily 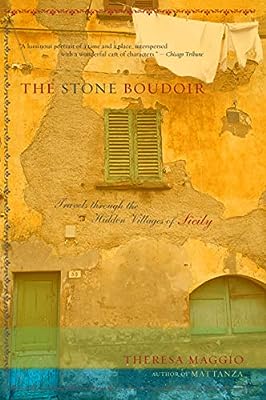 I was hooked from the opening lines: “I was on a mission: to find the smallest mountain towns in Sicily. Tiny jewels, remote and isolated, these are places tourists seldom see. But they are the island’s hidden treasure and the secret spring of Sicilian endurance.”

So begins a journey that New Jersey native Teresa Maggio took in order to understand the land of her grandparents. She traveled by bus, train and car to mountain-top towns throughout several Sicilian provinces, towns that I felt I visited right along side her. No detail is ignored as she paints a remarkable and candid picture of the people she meets: including bagpipers, farmers, housewives, school teachers, nuns and an old man on a mule who I’ll long remember. Their thoughts, their way of life, their traditions, their endurance, their foods and their beliefs are captured in the pages. Likewise, the towns became familiar as I followed her from place to place, inhaling the ambiance of each town: Santa Margherita Belice, Polizzi Generosa, Zafferana Etnea, Castiglione di Sicilia, Geraci Siculo, and the stone-clad towns surrounding Mt. Etna all became breathtakingly alive. Her vivid and painstaking description of February’s Festa di Sant’Agata in Catania takes you right into the streets with the thousands of devotees as they honor their beloved girl-saint, shouting “Viva Sant’Agata! O! Sant’ Agata, la gloria!”. I could almost hear their raised voices.

This is no ordinary travel book, not the journey of a tourist with 2 weeks away from the office. In fact, in most of these towns the “tourists” are the people who left Sicily to live and work in other parts of Italy or Europe, and who come home to visit in August. Teresa lived in most of the towns she visited, renting apartments or rooms with families, even a room in a cloistered convent and a remarkable stay in a cave; the time she spends living with her distant relatives are the most telling, and I absorbed the descriptions of their way of life and daily routines like a parched sponge. The simplicity of their lives, the frugality of their ways, their innate need to put on a ‘bella figura’ – so much was familiar to me, reminiscent of my own Sicilian grandparents and relatives. Long-forgotten memories were resurrected.

As I lay in bed the night that I finished this book, the words and images reverberated in my head, making sleep difficult. I ached to see the countless photos she snapped as she trekked on. I simply wasn’t ready to “leave” Sicily.

Each and every person with Sicilian ancestry should read this book – run, don’t walk to add it to your library. It’s a keeper.

Mattanza: Love and Death in the Sea of Sicily On Persephone’s Island: A Sicilian Journal