Those Without a Country: The Political Culture of Italian American Syndicalists (Critical American Studies Series) 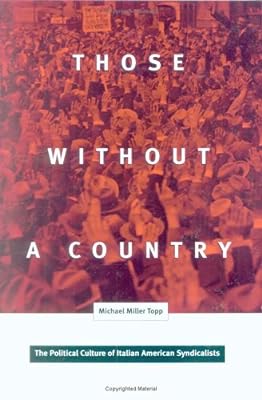 In the first book-length history of the Italian American syndicalist movement – the Italian Socialist Federation – Michael Miller Topp presents a new way of understanding the Progressive Era labor movement in relation to migration, transnationalism, gender, and class identity. Those Without a Country demonstrates that characterizations of “old” (pre-1960s) social movements as predominantly class-based are vastly oversimplified and contribute to current debates about the implications of identity politics for the American Left and American culture generally. Topp traces the rise and fall of the Italian American syndicalist movement from the turn of the 20th century to the executions of Sacco and Vanzetti in 1927. His use of Italian-language sources, combined with his attention to transnationalism and masculinity, provides new vantage points on a range of related topics, including the 1912 Lawrence, Massachusetts, textile workers’ strike, the impact of World War I on this immigrant community, and the genesis of both fascism and anti-fascism. Those without a Country brings forward fascinating new material to revise and refine our views of not only Progressive Era radicalism but immigration, gender, and working-class history as well.

The Mafia Cookbook: Revised and Expanded Wine Heritage: The Story of Italian-American Vintners