Trelawny’s Recollections of the Last Days of Shelley and Byron 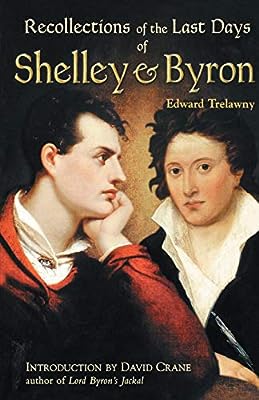 This memoir begins in 1821, when Trelawny—at the invitation of a friend—travels to Italy and finds himself in company with the Shelleys and Byron, who were staying at Pisa. Edward John Trelawny was one of the most entertaining of the many contemporaries who recorded their conversations with Lord Byron. He was very much a self-made and self-promoting individual, who worshipped Percy Shelley, who for many years sought to wed Mary Shelley, and who always considered himself in competition with Byron–at pistols, at swimming, at love-making, at warfaring, and even at writing. It is only fair to acknowledge that Trelawny was a brilliant story-teller. It is also only fair to recognize, as Byron himself did, that Trelawny was far from truthful. He can always be counted upon to bend a story a bit to make it sound a little better. In Byron: A Portrait , Leslie Marchand tells us that Byron “said once that if Trelawny would only learn to tell the truth and wash his hands, they might make a gentleman of him yet.” Such acerbic comments no doubt led to some resentment on Trelawny’s part, but his Recollections (1858), although biased and written long after the events, are clearly the work of a man who knew Byron–and knew him well. They are offered here for the direct light they shed on Byron’s final, fascinating years of life. The events recorded in these extracts begin in the spring of 1822 and continue through the death of Shelley later that year and then pick up during the final months of Byron’s life in 1824.

The Basilica of St. Mark in Venice Peking to Paris, An Account of Prince Borghese’s Journey Across Two Continents in a Motor-Car