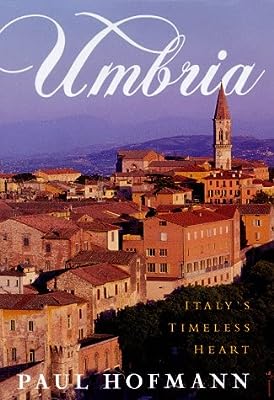 Italy’s well-known and loved travel writer shares the secrets of his favorite province.

Nothing is more authentically Italian than the mountains and valleys of gentle Umbria, where the olive groves and vineyards, like the ancient hill towns that populate the region, remain almost entirely undisturbed. These restful landscapes, less publicized than those of neighboring Tuscany, enfold impressive Etruscan and Roman ruins, medieval castles, grand cathedrals and palaces, and outstanding art such as Giotto’s frescoes in Assisi, paintings by Perugino, who was Raphael’s teacher, and other native masterwork. Paul Hofmann, whose most recent travel guide was hailed as “an indispensable book, a book to cherish” (The New Yorker), knows Umbria intimately. After four decades of visits and sojourns, he has produced this volume, rich with personal and historical anecdotes, profiling its cities and towns, villages and natural sights. Though the farthest reaches of Umbria are only a three-hour train or car trip from Rome, many of its hidden spots are unfamiliar even to Italians in neighboring provinces. Hofmann’s affection for the region is infectious, his insight unparalleled, and in his able hands, its simple joys–twisting country roads, robust wines, hearty food–unfold for the visitor.